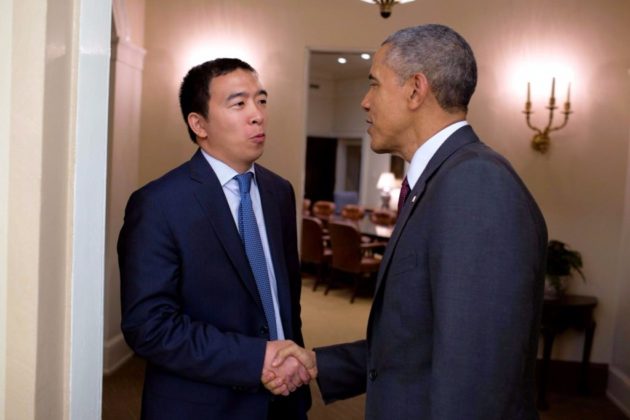 With the exception of Wyoming and a handful of other states, blockchain regulation in the U.S. has been disappointing at best. Yet, there may be a ray of hope from Democrat Presidential candidate Andrew Yang.

Who Is Andrew Yang?

Andrew Yang is an entrepreneur and founder of Venture for America (VFA), a non-profit organization with a mission of:

Mobilizing the next generation of entrepreneurs and equipping them with the skills and resources they need to create jobs.

Praised by the Obama administration in 2012, Yang was selected as a “Champion of Change,” and later, in 2015, recognized as a “Presidential Ambassador for Global Entrepreneurship.”

Somewhat a dark horse in this electoral race, Yang caused a flurry of excitement among the cryptocurrency community last summer. He declared that he accepted bitcoin, ether and other cryptocurrency donations for his campaign:

Along with the words:

Let’s build the future together

This sparked a storm of comments from his followers asking whether that meant that he supported the mainstreaming of cryptocurrencies. There were also plenty of enthusiastic statements like:

Nothing stops crypto, even Presidential candidates are jumping on!

Yang also had to contend with a decent amount of criticism. The usual opposers claiming that untraceable donations would lead to a flow of illicit funds and foreign financing. They even pointed out the damage to the climate from PoW mining.

Knowledge of Bitcoin Back to 2013

Regardless of the mixed reactions to his news last summer, the 44-year-old Yang of Asian descent could certainly bring the promise of the winds of change in American politics.

And his knowledge of Bitcoin goes back at least as far as 2013 when he tweeted about the then price meltdown when the price dropped under $600 USD:

I sense the bitcoin price correction will make some Fellows nervous http://t.co/VGCkXqtcLg #takesomeoffthetable

How far this outsider will get in the presidential race and how much he will do to thrust cryptocurrencies front and center if he wins remains to be seen. But, we wouldn’t mind betting that either way, he’s got a few satoshis hodled away for a rainy day.

And who knows, maybe his bits could even help fund his presidential campaign!

Do you think Andrew Yang holds bitcoin? Share your thoughts below!