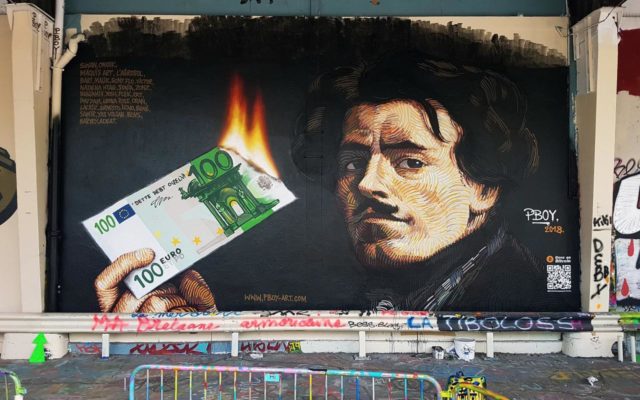 The French are nothing if not expressive. In the country of the language of love, free speech, and Charlie Hebdo, Pascal Boyart has revealed his third piece of revolutionary street art in Paris with a Bitcoin QR code hidden inside.

The Bitcoin Revolution in France

Onlookers around the world, especially from the Bitcoin clan, watched excitedly as Bitcoin became a part of the Paris protests.

One of the Yellow Vest protesters wore a sign on his back saying ‘Buy Bitcoin,’ and the movement became associated with more than just unemployment, taxation woes, and various other social unrest issues.

For many, they believed it to be more about cryptocurrencies, a movement to run the French banks, topple the Euro, and spark the Bitcoin revolution. 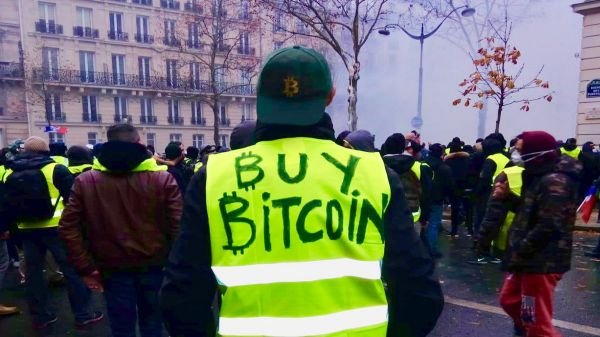 In all likelihood, the percentage of yellow vest protestors who actually know about cryptocurrency is pretty slim. Ledger’s CEO Eric Larchevêque previously told this author in an interview:

However, the fact remains that the Bitcoin movement is taking to the streets in France. This is now the third piece of street art from Pascal Boyart spreading the word about Bitcoin.

In the same vein as other pieces, the mural is provocative and radical in nature. It depicts French painter and Impressionist Eugène Delacroix burning a $100 euro note.

The piece signals the end of a reign of centralized institutions devaluing people’s savings and controlling their financial independence.

The significance of using the French romantic artist in his moral will not be lost on artists, historians, or literature aficionados. Delacroix is famous for his use of expressive brushstrokes and for shaping the movement of the Impressionists.

Now the third piece of street art he’s created to spread awareness about Bitcoin, a quick glance at his website or Instagram account is enough to leave you breathless. Pascal Boyart is one really, exceptionally creative and hard-hitting artist with strong political views.

Boyart’s work has been featured not only by several cryptocurrency outlets including Bitcoinist, but also in The New York Times, The Washington Post, Le Monde, and Reuters, among many others.

Bitcoin may be smaller than Amazon in terms of market value. We may still be in the nascent stages, and perhaps most French people don’t know about cryptocurrencies. But with activists like Pascal Boyart spreading the word, at least there are sparks starting the fire.

What do you think about the latest Bitcoin-inspired mural in Paris? Share your thoughts below!

The post Anti-Euro Bitcoin Art Pops Up in Paris Amid Protests appeared first on Bitcoinist.com.