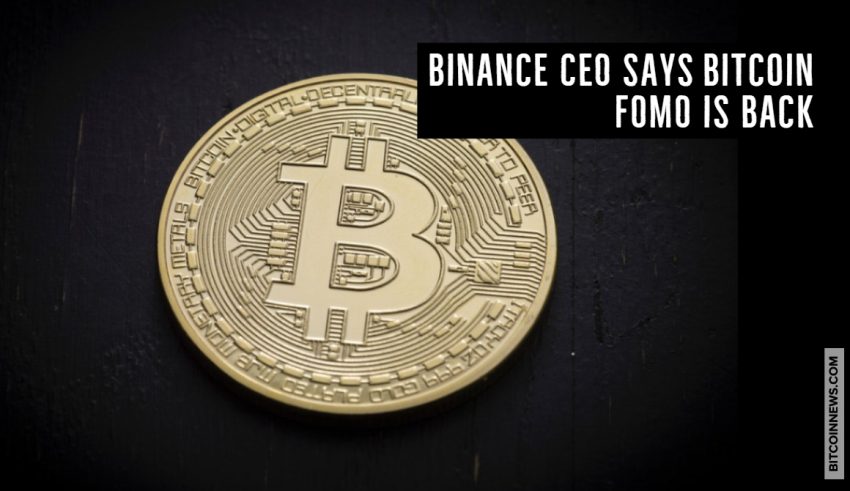 As Bitcoin enjoys a surge in the market +15.8 in the last 24 hours, the CEO of popular cryptocurrency exchange Binance has said the long-awaited Bitcoin FOMO is back. The same ‘fear of missing out’ is said to have played a major role in Bitcoin’s 2017 price surge.

CEO Changpeng Zhao has said he believes ”there is more money parked in pseudo fiat than most tokens”, using this latest price surge to back up his argument. ”Plenty of money to jump in, and in full FOMO mode”, he wrote on Twitter today.

I guess this was true. Plenty of money ready to jump in, and in full FOMO mode.

Everyone will be in Crypto. Don't get left behind! https://t.co/rfvRS7uhGK

It has been speculated that the jump in price was sparked by one Bitcoin whale in Asia who triggered an order totaling around USD 100 million between three exchanges, Coinbase, Kraken, and Bitstamp. The order was algorithmically managed, although analysts cannot point to what exactly influenced the buyer’s decision for such a large, synchronized investment across the platform.

As usually is the case in the cryptocurrency market, Bitcoin’s surge influenced many altcoins into higher trading prices.”Today, Bitcoin is in the driving seat,” e-Toro Israel analyst, Mati Greenspan, said.

The post Binance CEO Says Bitcoin FOMO is Back appeared first on BitcoinNews.com.