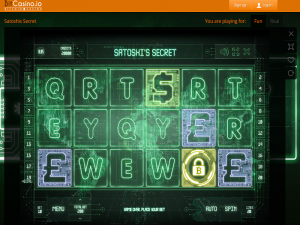 Bitcasino.io, the world’s first legally licensed and regulated Bitcoin-only casino gaming, recently announced the launch of the first video themed slot designed for Bitcoin players. Bitcasino has also expanded its offerings over on the mobile side of things, with the addition of 20 more games.

Disclaimer: This article was provided by Bitcoin PR Buzz. Bitcoinist is not affiliated with Ecoin and is not responsible for its products and/or services.

Provided by Endorphina, Satoshis Secret is described as a “6 reel, 3 row slot game with 20 paylines”. Any prizes earned by the user are achieved when a spin results in a combination of adjacent symbols on enabled paylines. Users can further increase their prize pot if wins occur on different paylines as well.

A spokesperson on the behalf of BItcasino said regarding the addition of their new game, Satoshis Secret game:

“We are delighted to launch the Satoshi’s Secret game, an industry first from Endorphina.  As a business, we remain committed to being the number one destination for Bitcoin casino players. We have added a mobile version of our most popular blackjack game, including a further 20 games which include Quickfire’s popular movie-based game Bridesmaids to GameART’s Atlantis World and Cleopatra Jewels to the platform.  Our portfolio of games provides the highest game experience for our bitcoin-only players whether it’s via desktop or mobile devices.”

People interested in Satoshis Secrets do not have to deposit Bitcoin in order to deposit, as Bitcasino offers the option to either play the game “for fun” or “for real”. The game is fully operational now and available for all to play.

Bitcasino.io is the world’s first legally licensed and regulated online Bitcoin-only casino gaming and sportsbook platform. Kopikas Enterprises d.o.o. has been granted a gambling license to conduct online gaming operations by the government of Montenegro under the License# 0042 for the website BitCasino.io

Bitcasino.io offers more than 800 casino games, including over €6,500,000 worth of jackpots, blackjack, live dealer casino table games, dice, baccarat, and lotto. Bitcasino.io has the most games, utilizes the latest HTML5 technologies, and offers players the highest limits.