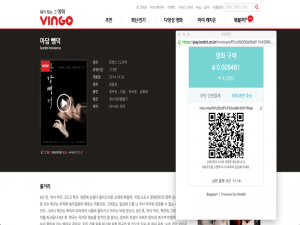 Korbit, the South Korea-based bitcoin exchange and merchant payment processor, announced that one of the biggest media empires in Asia, CJ E&M, will now be accepting bitcoin for its video-on-demand service, VINGO. CJ E&M is the media and entertainment subsidiary of CJ Group, one of the biggest business conglomerates in South Korea, which is also called a chaebol.

Korbit only founded in 2013 but has already amassed over 25,000 user accounts and has signed up 500 merchant accounts, which are mostly small and medium-sized businesses. CJ E&M is the first listed company in Korea to begin accepting bitcoin payments.

“Large enterprises in Korea are typically conservative in their approach to assimilating cutting-edge technologies, but with VINGO’s adoption of bitcoin we can innovate on a larger scale,” said Tony Lyu, CEO of Korbit. “We hope Bitcoin fuels CJ E&M’s growth in the global market,” Lyu continued.

The partnership will allow VINGO users to pay for content with bitcoin across multiple devices. To promote the use of bitcoin on VINGO Korbit is giving away 6,000 Korean won worth of bitcoin (about $6) to the first 1,000 users.

Korbit is becoming a leading player in bitcoin both in its domestic market and abroad. Korbit is the world’s first exchange to offer cryptographically verifiable proof of customer reverses and has been backed by notable investors including Tim Draper, Barry Silbert, AngeList’s CEO Naval Ravikant and Pantera Capital. What is noteworthy about this is the Korean government helped arrange some of these meetings with investors.

South Korea is a big proponent of entrepreneurship and innovation, investing 3.31 trillion won (~3 billion dollars) to nurture startups with subsidized loans and state-funded investments for the technology sector in particular. The country is trying to create a Silicon Valley environment by also offering incentives to investors such as tax benefits.

South Korea has been trying to lessen its dependence on the manufacturing sector, which accounts for an overwhelming percent of the country’s GDP. The Korean government, although seemingly supportive has yet to provide a clear regulatory outlook for Bitcoin and taxation on bitcoin assets also haven’t been clearly defined.

Korea seems like they are willing to take the risk with Bitcoin. The government has been trying to change the stigma of failure in the country by letting entrepreneurs know that they shouldn’t be afraid of failure and just like startups, Bitcoin has the risk of failure.

Korea is moving fast in regards to bitcoin with its supportive government and technology-focused economy. Korea already has a few bitcoin exchanges, a couple of bitcoin ATMs and a growing number of startups.

Korea is not unfamiliar with alternative payment processes; the country has been using T-money, a transportation card to pay for public transport, taxis and even in some convenience stores, since 2004.

KaokaoTalk, the most popular messaging app in South Korea, have recently launched a mobile payment service called KaokaoPay to allow mobile payments. Additionally, the number of NFC-enabled smartphones has grown to over 50% of smartphone subscriptions in Korea.

“Digital payments have spread rapidly to certain aspects of Korean life, such as the public transit system. Online payments, however, are not yet user-friendly, so we believe Bitcoin can add a lot of value there,” said Lyu.

Bitcoin’s user base will continue to grow in South Korea as the number of partnerships like Korbit and VINGO grow. Especially as startups in Korea continue to make using Bitcoin easier, more accessible and give people convincing reasons to use digital currencies. Additionally, Seoul, South Korea is hosting the first Inside Bitcoins conference in less than two weeks.