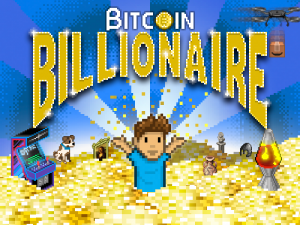 Bitcoin Billionaire is an app created by FizzPow Games, and was published in partnership with Noodlecake Studios. Bitcoin Billionaire was released on the iOS App Store on November 6th, 2014, and was quite a hit with a average 5 star rating from 14,000+ reviews. Today, I’m here to talk with Michael Stockwell, the lead developer and founder of the game as well as FizzPow Games.

Starting the game with a dilapidated office and rudimentary mining hardware, you rise through the ranks by “mining” bitcoins, in which you simply tap the screen. Through upgrading your hardware as well as purchasing investments, you will be able to purchase upgrades and even move locations.

Could we start with how you got the idea for the game, what inspired you?

I had been thinking for awhile about wanting to do my own take on a Cookie Clicker type game for mobile.  My friend and game design partner Tim and I have always enjoyed this kind of “idle clicker” or “incremental” or whatever you want to call them games.  At the time, we had also seen another mobile game in the genre, Make it Rain, get a lot of attention.

How did you get into Bitcoin and why did you decide to make a game about it?

We brainstormed on a call and relatively quickly the idea of a Bitcoin theme came up.  I honestly can’t say for sure who said it first, but I think it was Tim.  We both have always been a proponent of Bitcoin for many reasons, but I think primarily due to its decentralized structure.

Let’s just say I don’t have a lot of trust in the Federal Reserve or the global banking structures of the world ;)  So it seemed like a fun way to make a game where you could create virtual money from a virtual computer while also having the side benefit of spreading awareness of crypto-currencies.

Did you ever think Bitcoin Billionaire would have achieved the press and publicity it now receives today?

We certainly hoped so and put everything into getting the game done the best we could.  I partnered with Noodlecake, our publisher, in hopes to get it to as wide an audience as possible.  We also plan future content updates to the game that we hope to bring it to new heights.

Any other cryptocurrency based applications in the future?

Nothing planned as of yet, but you never know.

What was the hardest part of developing Bitcoin Billionaire?

I think the biggest challenge for me was remotely managing everyone else (e.g. approving art, music, game design sessions, marketing) while doing 100% of the actual software development at the same time.

I had a limited amount of funds to get this project done and ended up living off of credit cards the last 2-3 months as I went over the initial time frame.  This was extra nerve-wracking at times because I felt the need to make some drastic design changes that probably lost us 1-2 months of work, but ultimately made the game the success it became.

Can you describe your partnership with Noodlecake?

Originally I was looking at trying to pay a firm to help with PR and marketing.  I had used a publisher in the past and it didn’t feel very beneficial for us on that game.  As I was researching I came across Noodlecake and something about how they described themselves and looking through their game portfolio made me want to try contacting them.

I was out of money and realized a partnership may be the right solution if it felt right.  I ended up talking to Arlin over there and I felt like he totally understood what our game was and what we were aiming for and laid to rest all my concerns I had from my previous publisher.  Working with them has been great so far, and they have been way more accessible than our previous publisher.  I am hoping with our next big content update we can take the game to a new level.

I’ve played the game myself, and actually spent a good 10 hours on it, I found it quite addicting and a great way to pass time. Not only was it entertaining, the side benefits of exposing Bitcoin is always good. Thank you Michael for spending you’re time talking with me!

Bitcoin Billionaire on the App Store

Have you played Bitcoin Billionaire? Feel free to chime in the comments what you felt about the game!