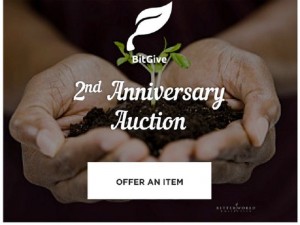 The BitGive Foundation — celebrating its 2nd Anniversary — is asking for donations to fund its mission to demonstrate the social value of Bitcoin to people around the world. To encourage donations, BitGive will hold an online auction on the occasion. 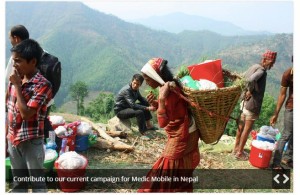 Connie Gallippi, Founder and Executive Director of BitGive, took an early leadership role in Bitcoin philanthropy, founding BitGive in mid-2013. Gallippi aims to spread the knowledge about Bitcoin across the world. Pursuing the goal, the organization is organizing a fundraiser through an auction that will support the BitGive in its efforts.

“This week, the BitGive Foundation is delighted to announce that we will be celebrating our 2nd Anniversary with a special online auction. It’s been an amazing couple of years – we’ve become the first US-registered Bitcoin charity and spearheaded efforts on behalf of the generous Bitcoin community to raise funds and awareness for organizations such as Save the Children, The Water Project, and TECHO. Currently the Foundation is raising funds for earthquake relief efforts in Nepal with Medic Mobile, while developing our next initiative for “Bitcoin Charity 2.0,” growing with the technology and the industry to take giving even further.”

BitGive has been at the forefront of raising funds and spreading awareness about Bitcoin for the last two years. It has successfully worked with organizations such as Save the Children, The Water Project, and TECHO to name a few. Even now, BitGive is campaigning for earthquake relief efforts in Nepal with Medic Mobile, while simultaneously developing its next initiative for “Bitcoin Charity 2.0,” growing with the technology and the industry to take charitable giving even further.

All donations to the BitGive Foundation go to charity; this latest auction hopes to collect donations of goods and services until mid-July, which BitGive plans to use for its charitable activities. The auction will last for two weeks, with the Better World Collective issuing receipts for all donations. Winning bids can be paid with Bitcoin and credit cards.

Some of the items up for grabs in the BitGive auction include: three autographed copies of Mastering Bitcoin by Andreas M. Antonopoulos, donated by Zapchain; artwork by Bitcoin artist Caitlyn Mello; a few items from Overstock and Gyft; and collectible Casascius coins, donated by Michael Perklin of  the CryptoCurrency Certification Consortium (C4). Perklin says that his g

roup is thrilled to support the cause and provide charitable offerings to those in need. He further adds that Casascius coins have served as an iconic emblem of Bitcoin since the network’s earliest days, so they are proud to provide these pieces of Bitcoin history to BitGive’s auction in the hope that they further BitGive’s mission.

Will you participate in the BitGive Auction? Let us know in the comments below!