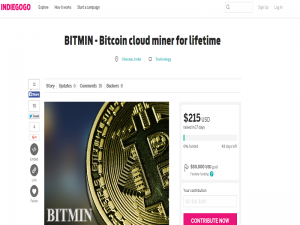 BITMIN is a company that offers investors a platform with a lower entry barrier to mining, which is becoming more important due to the fact that the competition in Bitcoin mining has increased, and will continue to do so. The idea was conceived by Sathes Kumar, a person that wanted to give people a real chance at earning profit from Bitcoin mining after seeing the extremely high costs of competitive Bitcoin mining.

“Inexpensive mining setups don’t offer much return on investment, and high-end mining setups can be prohibitively expensive. The individual miners are losing their potential because of the difficulty and demand. The BITMIN cloud mining is the only and best solution to gain advantage of the virtual currency.” 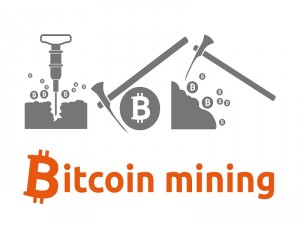 BITMIN is doing this by allowing investors to buy “shares” from their IndieGoGo Campaign page for $5, which is equivalent to 18 GH/s of SHA256 mining. This is different compared to traditional mining pools where individual users “pool” their hashing power into one collective entity. BITMIN will be using their personal resources as well as money raised in the crowdfund to purchase the hardware necessary to mine profitably at Bitcoins difficulty, and split the profits based on how much each individual investor contributed.

Compared to other cloud mining companies, the rate is quite competitive. On top of the  promise of no maintenance cost and a one-time investment, (though reinvestment or additional buying installments are sure to be available) BITMIN is sure to be an attractive option for investors looking for a “set it and forget it” investment.

“To overcome that risk we came up with the idea BITMIN. It is a cloud mining platform with 0 hiring cost only one time pay, it runs lifetime. The profit will be shared depends on their contribution for BITMIN.”

BITMIN’s initial plan is to start with 50 TH/s of hashing power, with plans to gradually increase mining power as time passes by. BITMIN plans to use the following top end machine models to achieve their goal of 50 TH/s:

BITMIN states this the list is not definitive, and will change if more powerful, more efficient mining machines surface.

“We change hardware to fulfill our goal more profit less power consumption. We buy hardware batch by batch, initially we planed to have 50 TH/s mining capacity then it will be increased gradually. ALL hardware purchases are done direct face to face with our supplier.”

BITMIN is also over a quarter done with their IndieGoGo campaign, with a goal of $50,000 USD. BITMIN intends to use the money to “kickstart” (no pun intended) operations, as it claims to have everything else ready. With only $215 raised so far however, BITMIN may either not come off the ground or be faced with serious delays.

Does BITMIN have what it to takes to compete with the cloud mining competition? Will it achieve the means to get off the ground? Let us know in the comments below!