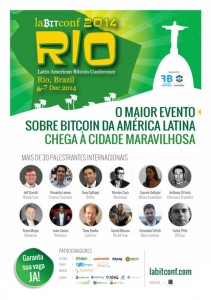 The city of Rio de Janeiro in Brazil will be hosting the second Latin American Bitcoin Conference.
This international event on digital currency will be featuring more than 40 speakers, including Tony Gallippi (BitPay) and Nicolas Cary (BlockChain.info), CEOs of major Bitcoin startups, and Ronaldo Lemos (MIT-MediaLab), the Civil Marco creator and host of one known brazilian TV show (Globo News) and several others important figures in the space.
One of the sponsors of the event is Coinverse, a pioneer company in Brazil who brought and installed the first bitcoin ATM in the country and is set to be at the event showing their financial product solutions. 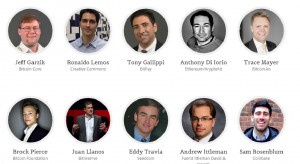 Last year, after the completion of the 1st Conference in Buenos Aires, Argentina, investors saw the Latin American market giving birth to a sudden boom and a widespread interest in digital currency. According to Rodolfo Andragnes, one of the organizers, the event was attended by about 350 participants and at the time the bitcoin community had about 5,000 users.
Rudolfo stated:

“Today, we have at least 3 times that number. The conference was essential for Argentina to position itself in the international community and also for the growth of Bitcoin in the country”

Investing in bitcoin is especially recommended as a long term investment, but it is also very attractive for experienced investors seeking short-term high returns exploring volatility. This has sure attracted a cheer number of enthusiasts and entrepreneurs in Latin America who focused in bringing a wider awareness regarding digital currencies.

Brazil has about 50,000 users and a pretty active scene of startups and the second biggest market for digital currencies in the Latin America, along with Argentina which is currently the market leader; the bitcoin communities of these two countries joined up to organize this event, which makes the expectation for the congress to be very large.

According to Safiri Felix, Coinverse executive , the Latin Amercian Conference will be an excellent opportunity for the Brazilian public better understand the technology and explore the possibilities of financial mechanisms that promise to reinvent the way we handle money. Bitcoin has proven to be the most efficient way to make expenses in foreign currencies, perfect for tourists and others interested in receiving services or making purchases abroad, while being an excellent tool for banking the unbanked in many countries of Latin America.

The current value of the bitcoin market capital is around $ 5 billion, and today has more than 2 million users around the world, especially in China, USA and Canada. At the moment more than 90,000 businesses already accept bitcoin in a worldwide scale and the purchase and sale market has registered successive records of transaction volumes.
The Latin American Conference is scheduled for 6-7 December 2014.
For more information and registration please visit: LaBitconf 2014 RIO