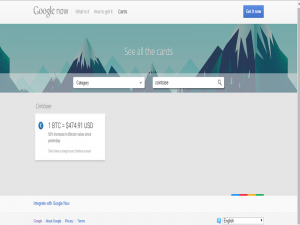 Google Now is an application available for most mobile operating systems that enable users to check all kinds of information regarding weather, navigation, and places to visit nearby. The application has a large userbase that increase the chance that some of them will notice the new cards. More importantly, the Coinbase card should attract attention to bitcoin.

In a recent update to the Google Now application, you will see the addition of 40 cards that will notify the user of certain information regarding a company. There is one company assigned to each card, and the user receives notifications depending on what type of company is present. Currently, you will receive notifications in regards to fluctuations in the bitcoin price in accordance with the Coinbase exchange as well as Coinbase wallet and transaction updates.

An example of this can be seen if you receive bitcoin to your Coinbase wallet. In this case, the user will receive a notification from the Google Now application that announces the receiving of bitcoin to the wallet. As of right now, some users will be able to access this feature, and the update will roll out to all android users in the coming weeks.

Here, we can see an example of what the card looks like once the notification is clicked on. You can

see how it has been simplified as it does not show transaction or sender addresses. This should be useful as it will appeal to users who do not trade bitcoin but simply use coinbase as a way to store their bitcoins. The general response to this news is accepting as android users who trade bitcoin can easily receive price notifications that help them keep track of their bitcoin value.

This is a huge shout out for Bitcoin! Only working with 30+ companies, and one of them just happens to be Coinbase. Thanks, Google!

The rising interest in Bitcoin is good as it will attract new companies and users into using the currency. It seems most people who are involved in bitcoin do trade it so it would be interesting to see how many inexperienced users decide to venture into the trading world. Unlike other currencies, bitcoin brings new opportunities to users including what could be referred to as a tutorial before involving yourself in stocks.

There are different reactions to the news as some users thought that Google was going to start accepting bitcoin. This is interesting as it could be implemented as a payment option in the Play Store or to buy the Google phones. However, we are far from Google accepting bitcoin as payment or at least that is the general suspicion. The current news is a step in the right direction as it will spread awareness regarding bitcoin and Coinbase, the first regulated US bitcoin exchange. It is just a matter of time before bitcoin expands into more homes and businesses. I hope we can all witness that day.

Will Google Now somehow attract people to try Bitcoin? Share your thoughts below!

Editors Note:  Coinbase is regulated in some states in the US currently but not all.