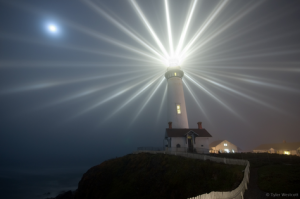 Lighthouse, a blockchain-based crowdfunding application, has gained traction since its launch on January 20th. Since it is built on top of the blockchain, Lighthouse is totally decentralized, eliminating the need for a centralized management system. Lighthouse allows anyone to crowdfund their project on the application, without any registration or fees, and all funds raised through the app are raised with bitcoins exclusively.

The first project funded on Lightouse was Medic Mobile, a non-profit providing real-time information to medical workers in developing countries. The project raised 3.5 BTC, which at the time of press is $763, in less than a day. 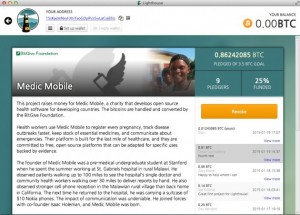 Because of no fees and ease to set up a campaign, Lighthouse has quickly became a home to micro-crowdfunding campaigns. The Seoul Bitcoin meetup group, as a test of the new application, raised 0.01 BTC ($21) to pay for snacks at their meetup. Another person, either as joke or a test, ran a campaign to get himself a six pack of beer–which was successfully funded.

Other campaigns are much more ambitious and more focused on software development, Bitcoin Core development especially. Alex Waters, a former core developer, is trying to crowdfund a website that will streamline the process of testing and documenting Bitcoin Core’s codebase. His website, Bitcointesting.org, would highlight new changes made to the beta version of the Bitcoin Core Github and would give developers a way to rate and review the code.

The largest campaign on Lighthouse so far is Bitsquare’s attempt to crowdfund 125 BTC ($27,303) to fund the development of their decentralized bitcoin exchange. The exchange has raised 52 BTC ($11,363) thus far; even without meeting its goal, this campaign has raised the largest amount of money on Lighthouse to date.

There is a unique process involved in starting a funding campaign — as well as donating to a campaign — on Lighthouse, compared to its more traditional counterparts. Instead of visiting a website, projects’ crowdfunding campaigns can only be seen through project files, which you download through the organizations’ websites or through a gallery of lighthouse projects. The file connects to the server hosting the project, which is where you can see the projects’ details and send bitcoins to their campaigns.

Lighthouse also differs from traditional crowdfunding platforms in the way donations are handled. On lighthouse, donors can recall their funds at any time during the fundraising period if they change their mind or are dissatisfied with the direction a project is heading.

To deal with bitcoin’s volatile price, instead of donating right away you can just express interest into the project on gallery of Lighthouse projects. When there is enough interest, the crowdfunding campaign for the project begins–allowing the project to quickly convert the bitcoins to fiat and avoid the risk of losing value due to exchange rate fluctuations. This is ideal for campaigns that use funds for a project that will have to pay expenses in fiat. 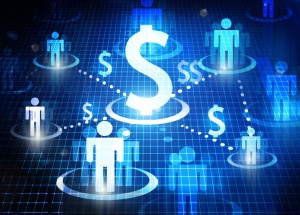 Development for open source projects, especially Bitcoin Core development , is one of the main reasons the creator of Lighthouse, Mike Hearn, built the application. Right now, a large amount of Core development is dependent on the Bitcoin Foundation. Due to a lack of transparency and other issues, many people are not too happy with the Foundation and are looking for an alternative  way to support development.

The development of Lighthouse was supported with a $40,000 donation from self-proclaimed bitcoin millionaire, Olivier Janssens. His donation was motivated by a desire to see a decentralized alternative to the Bitcoin Foundation. Janssens has continued that mission by now pledging $50,000 to Bitcoin Core development projects on Lighthouse. So far, he has not given out any of the $50,000 yet but he did donate 10 BTC to Bitsquare Lighthouse campaign.

Currently, Lighthouse is still in beta, and Hearn’s main focus, is resolving bugs. But even as the bugs are fixed, the future of the project is still undecided. Mike Hearn hopes others will take the reigns of Lighthouse and thus decide for himself what to add to the project.

What project would you like to see funded on Lighthouse?

The post Decentralized Crowdfunding App Lighthouse Is Getting Traction appeared first on Bitcoinist.com.