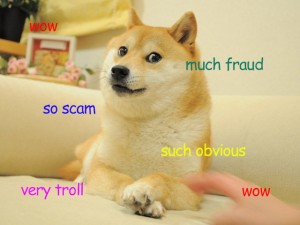 Over 1100 BTC have been reported as missing from Moolah, a financial platform offering consumer, merchant, and exchange services in the UK, US, and Ireland. The Syscoin developers reported Moolah owes 750 BTC and is initiating legal action via Selachi LLP. The other 400+ BTC missing were reported on the BitcoinTalk forums by forum users in a thread created by BlockaFett.

“…we have rapidly burned through our reserves and are now in the position of having a negative balance sheet. Losing certain clients that we relied on for revenue, means that we do not have the funds to continue paying staff, or pay our suppliers. Our costs over the first year have been astronomical in terms of legal and operational expenses, and our staffing costs now greatly outweigh our incoming funds. A number of the team have spent the past 10 days in Asia (personally funded, not company funded) attempting to secure vital contracts that would ensure the future of the company, but these attempts proved fruitless..”

“While we used the word bankruptcy, I would like to make it clear that our consumer reserves are entirely solvent; and the plan was for a voluntary dissolution…After making the [post-mortem] post [on October 14, 2014], a number of people reached out to us – and some of these people included private angels and well established VC firms…After a number of internal discussions, we have found a way. Our core platform will be sticking around…We’ll be focusing on what we do best, merchant solutions. A simple but solid API for merchants. Easy storefronts for people wishing to sell good and services online. Instant conversion to FIAT with quick and easy payouts in local currency. Retail solutions.”