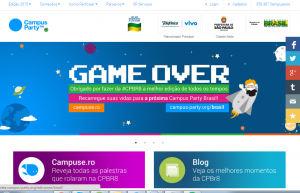 Campus Party is an annual technology festival where thousands of “campuseros” (hackers, developers, gamers and geeks) equipped with laptops camp on-site and immerse themselves in a truly unique environment.

Campus Party unites the brightest minds under the idea that the Internet is not a network of computers; it’s a network of people. Campus Party is already recognized as the biggest electronic entertainment event online in the world.

Campus Party 2015 (CPBR8), in São Paulo Expo in Brasil will be the acting grounds for a special event promoted and supported by a wide number of big companies. The event was held during this last weekend at one of the biggest cities in the country, São Paulo. 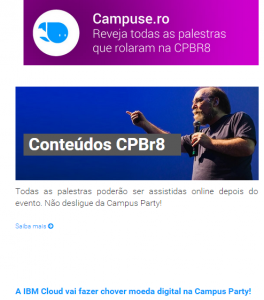 This year, IBM took this occasion to promote its cloud platform and Bluemix SoftLayer technology, sponsoring an event consisting in the distribution of digital currency. IBM released a series of bitcoin “Airdrops” throughout the event with the purpose of allowing the participants to collect digital coins with their smartphones using an application that captures digital currency related signals.

However, access to the “Airdrops” was restricted, and the entry was only valid for people who participated in the event and required that the interested in picking up a few bucks installed the “IBM Airdrop” application on their smartphone directly from Google Play. Despite having a partnership with Apple at the corporate market, the IBM Airdrop App was only available to Android users, so iPhone users couldn’t participate in the Airdrop Event.

The event regulation explains that it was held on February 7, 2015 in two Airdrop campaigns: one in the period going between 09h to 13h and another period going from 14h to 19h.

Besides needing the Application to be installed on the phone, the participants also needed to a bitcoin wallet activated. The application would give them the right information regarding the Airdrops and during these “Bitcoin showers” the participants needed to catch these Bitcoin drops with their smartphones waving upward in the air.

IBM also gave the chance for those who downloaded the app to have a 30-day period to test their newest software, Bluemix.

For IBM the Campus Party also a way to get and to know developers and entrepreneurs and to advertise the development platform launched in 2014.

The cloud is already part of the modern world and increasingly becoming a huge slice of the world economy. IBM has foreseen this and is now one of the most prominent companies in the industry. However, the extreme competitiveness in the environment has pushed IBM to become involved with digital currency. 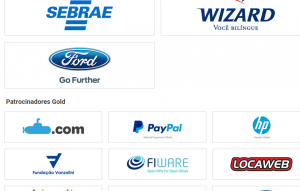 Along IBM, many were the companies participating are supporting the Campus Party, including Paypal, D-Link and Ford; however IBM was the only company managing the Bitcoin Airdrop Event.

During the “bitcoin shower” many “bits” were distributed in a total amount of $2500. The coins were tiny fractions of bitcoins with different values ranging from 1 to 10 dollars’ worth of bitcoin.

It seems that its becoming more than usual for big Corporations such as IBM getting indirectly involved with the digital currency these days. This is an unquestionable proof that bitcoin is reaching its majority and will soon walk freely amongst other currencies.

Were you at this event? If you went to this event let us know about your experience on the comments bellow!