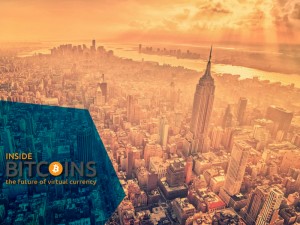 Here is Bitcoinist’s day 3 coverage of the Inside Bitcoins New York conference!

Factom, Kirby’s blockchain project, builds on top of the Bitcoin blockchain — much like how many useful applications are built on top of the Internet. The projects first collaboration is with Healthnautica.com, which is working on a tool for HIPAA compliance. However, the transparency vs privacy remains a pressing issue, with the risk of these blockchain projects getting hacked increasing concern. Therefore, the main focus of this project is making sure that the records stored on the blockchain are tamper-proof.

We Are to Act, Not be Acted Upon: How the Blockchain is Fueling the Personal Empowerment Movement

Brian Nelson, Founder of BTC Launch and Bond Manager of Alpha Surety Brokerage, offered his views on what Bitcoin and the blockchain have to offer.

Are we making our own descisions? Sometimes, it feels as if powerful institutions are making our choices for us. With the blockchain, people will be able to reclaim their autonomy by harnessing the information the blockchain is capable of providing. However, the big question is how Bitcoin will make it into the mainstream. According to Nelson, the key to mainstream success is the development of simple tools, self-empowerment, and education.

How To Make Bitcoin Easy For Small Business

The following session was led by Steven Michaels and Bryan Skarlatos. Michaels is the President of the Digital Currency Institute and Founding Member of the San Diego Bitcoin Association; Skarlatos is a Partner at Kostelanetz & Fink, LLP.

This session addressed the issue of making Bitcoin work for small businesses. The duo said that the key to having Bitcoin success is building local Bitcoin communities. Businesses should start and support local meetup groups, while also joining meetup groups for other local businesses. This type of community building will allow local companies to establish a consistent Bitcoin presence in the community that offers educational resources.

Michaels and Skarlatos also spoke about Bitcoin taxes. The most important part of properly reporting your Bitcoin earnings is consistency. There are a number of options for reporting Bitcoin income, but businesses need to stick with one method. However, it is worth researching the various reporting methods so that businesses can choose the one that works best for them. As with any other taxable income, the best way to be compliant is to do adequate research and contact tax professionals.

How Washington is Impacting the Digital Asset Industry 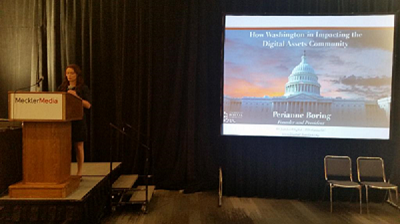 The last lecture before lunch was delivered by Perianne Boring. She is the Founder and President of the world famous Chamber of Digital Commerce.

Bitcoin is an agent of change that has the long-run potential to impact industry, government, and humanity as a whole. However, there are problems concerning Bitcoin regulation that will hinder Bitcoins short-run capacity for change. AML, QFAC, consumer protection, privacy, and cybersecurity all need to be addressed before Bitcoin can have a substantial impact on global commerce. Boring noted that these issues have elicited a lot of complaints about Bitcoin, and that the community needs to come together to address these problems and develop solutions.

What has been your favorite Inside Bitcoins New York session so far? Let us know in the comments below!