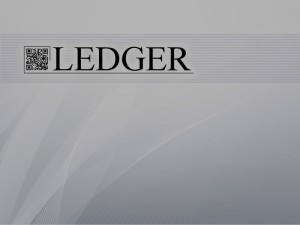 Ledger (not to be confused with the hardware wallet company) aims to be the first of its kind: a bitcoin-only scholarly journal. Ledger plans on publishing original research articles exclusively about cryptocurrency and cryptocurrency-related topics, such as mathematics, politics, and economics, to name a few.

“Ledger aims to encourage greater involvement by academics in cryptocurrency and foster a culture of rigorous analysis and peer-review within the Bitcoin community. It also aims to spur the aggregation and filtering of important content generated across relevant communication channels.”

Bitcoin is much more than a new way to transfer value from point A to point B. Bitcoin has the potential to make several sectors of industry, including the government, irrelevant. Frictionless payments — combined with transaction fees equating to pennies — is just the beginning.

However, to better understand what Bitcoin’s features and limitations are, we need to have resources that allow scholars and scientists to share their research and findings in one place.

“Due to its novelty and wide-ranging nature, cryptocurrency studies have not sat comfortably in any traditional journal, and it is thus our aim to create the first purpose-built vehicle for the leading research in the field.”

Launched by the University of Pittsburg, Ledger recently published an announcement on its website titled, “Ledger: Call for Papers,” inviting authors to submit their research in preparation for Ledger’s first academic publication. Ledger publishes on a quarterly basis through the University Library system; the journal’s papers are always peer-reviewed transparently, and are treated like any other academic papers. The editorial team is nothing to scoff at either, with professors from prestigious universities such as Harvard, MIT, Oxford, and Standford — further depicting how serious this project is.

Unlike other academic journals, Ledger timestamps all published research in the Bitcoin blockchain and encourages authors to sign their manuscripts digitally to ensure authenticity. Authors enjoy fee-less submission, in order to avoid dissuading anyone from submitting to Ledger.

For any interested parties out there, the deadline for submissions for the inaugural issue is the 31st of December, 2015. Ledger has published guidelines for authors to adhere to if they are interested in submitting to Ledger, on top of the four thousand word limit.

Do you plan on using Ledger as either an author or a reader? How do you think this will legitimize the face of Bitcoin? Let us know in the comments below!