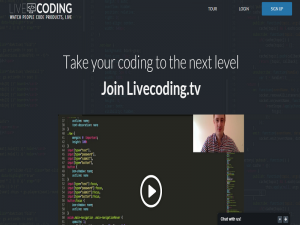 Coding is becoming an ever important aspect of our society. Where coders used to be called “geeks” and “nerds” for spending time behind a computer to create applications,  society is now relying on those people for our everyday life in many ways. And if you have ever wanted to see someone code live, Livecoding.tv is well worth checking out.

Livecoding.tv – The Coders’ Version of Twitch 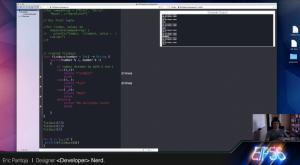 When someone dabbles around with coding, they will often find themselves at a point where they could use some form of mentorship. Especially when you try to learn things in your own time, it’s hard to remain focused and to think outside of the box. And following a programming course is not something for everyone, due to time constraints, financial reasons or otherwise.

Livecoding.tv wants to provide exactly that: live examples of people coding a website, application or anything else, and a direct way to communicate with like-minded people. In doing so, viewers can ask questions to the developer, or even give their own feedback on which code is being used.

In February of this year, Livecoding.tv went live as a public beta, and over 40,000 users have registered for an account to date. The interesting part is that people from over 160 countries have shown an interest in this “Coders’ version of Twitch.tv”. Plus, several programming languages have been steamed so far, including Python, PHP, and C#.

Watching people work their magic while coding is not the only promising aspect of Livecoding.tv. Developers can use this platform to round up beta testers for their project, or even get feedback on their recently released application. Famous developers have been using Livecoding.tv so far, including Stephen Wolfram.

When asked on his vision for Livecoding.tv, Co-founder Jamie Green stated:

“Interaction with expert coders is one key thing that differentiates us from a regular online tutorial you can watch on YouTube. Some people say that it helps them to concentrate and to think better if they know that they have an audience they’re not going to be switching to Facebook every five minutes and getting distracted.”

A Potential Future for Bitcoin Developers?

The Bitcoin community is filled with brilliant developers, all of whom are working on new and exciting use cases for blockchain technology. And these developers could benefit tremendously from a platform such as Livecoding.tv, in order to engage users and collect valuable feedback. And who knows, maybe an investor will see your work and help you out financially.

What are your thoughts on Livecoding.tv? Let us know in the comments below!

Images courtesy of Livecoding.tv and TechCrunch