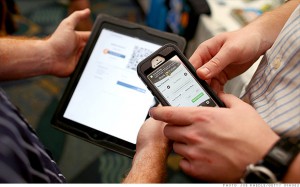 The Internal Revenue Service’s notice last week will force the average Bitcoin user to keep a strict record of every purchase made all year long — then perform difficult calculations to account for the changing value of a bitcoin.

It’s meant to extract taxes from any gains in Bitcoin’s value, and the rule applies to everything bought with electronic money, from coffee to cars.

That’s problematic for two reasons. The going rate for a bitcoin fluctuates wildly — easily by more than $10 a day. And no one diligently records the price of a bitcoin at every purchase.

“That would obviously create an accounting nightmare for taxpayers and may cause taxpayers to avoid using virtual currency,” said Jeffrey Hochberg, a tax attorney in New York.

Don’t give Uncle Sam a 0% loan

“This ruling is a warning shot across the bow, mostly to business and large traders, that you’ll have to deal with the income tax evasion consequences,” Daley said. “I don’t think it’s a signal to consumers that we’ll take away the anonymous nature of Bitcoin.”

If the federal government wants to keep track of people’s bitcoin wallets, it could force online exchanges — where people buy and sell bitcoins — to follow tax rules similar to those at brokerages. Those financial institutions must submit information about clientele to the IRS, which keeps track of people’s accounts.

By declaring bitcoins and virtual currencies as property, the latest IRS guidance also opens the door for states and cities to apply sales taxes anytime someone acquires a bitcoin.

And things get trickier for companies that accept bitcoins as payment and keep them for a prolonged period of time. Any drop in Bitcoin value could shrink their revenue but leave them on the hook for a fixed amount in sales taxes.

“This is a space where the killer Bitcoin app could emerge,” he said. “Something that tracks your basis [Bitcoin value] and records gains and losses against market value, daily.”

In the meantime, the IRS is accepting questions about the recent notice by email.