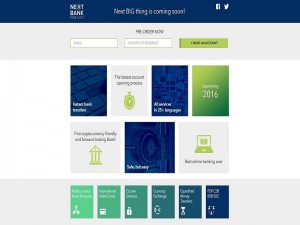 NextBank, the world’s first Bitcoin bank, has announced that they will be stopping their public crowdfunding campaign, due to a recent injection of $1.4 million from 2 venture capitalists for 4% of the company.

Disclaimer: This article was provided by Bitcoin PR Buzz. Bitcoinist is not affiliated with NextBank and is not responsible for its products and/or services.

NextBank has a now has a total of $2.35 million in funding, with $.95 million brought from private VC investments coming from small time investors. The small time investors can choose to either be minority shareholders or to be refunded in full. NextBank in the press release stated that they “will continue funding through venture capitalist avenues to ease the concerns of the public”.

NextBank is still scheduled to launch 2016, with fees 15x less than the competitor’s 3-5% typical rates. Furthermore, offices will be established in UK, France, Germany, Spain, China, Malaysia and Russia the following year.

Even with the new private investments, NextBank has not changed to please shareholders, something that frequently occurs with startups.

“NextBank’s main goal is still to provide advanced banking services for Bitcoin and cryptocurrency clients around the world. NextBank accounts will be able to support 75+ currencies and precious metals. The modern Bitcoin bank will also offer global Debit Cards, accounts denominated in both fiat such as USD and various cryptocurrencies, SWIFT transfers, an escrow service, currency exchange, and much more.”