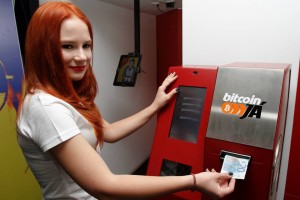 At last, Portuguese Bitcoiners will be able to easily buy and sell Bitcoins in an ATM in the country city capital, Lisbon!

Bitcoin Já is a Portuguese Company who recently launched a new and innovative Bitcoin Teller Machine. Bitcoin Já established a partnership with Partteam to fully design and produce this equipment with local resources. 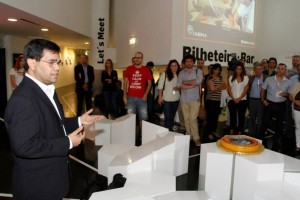 Joaquim Lambiza, during the presentation event

Portugal is well known for their brilliant Bitcoin ATM production, but Bitcoin Já Bitcoin ATM is the first Bitcoin Teller totally designed and manufactured in Portugal by a Local Startup.

Bitcoin Já ATM launch event was held last Saturday, 4th October, at the most technological advanced movie theatre to operate in Portugal.
The bitcoins that will be provided by the new ATM, opened this week at the movies Saldanha Residence in Lisbon, can now also be used to buy tickets at this cinema.

One day before the event, the Bank of Portugal (BoP) issued a warning about the “risks of using virtual currencies” such as the ATM of bitcoins which was to be inaugurated next Saturday in Lisbon. The BoP also warned that transactions in ‘virtual currency’ could be misused for criminal activities, including money laundering, and remember that both the European Central Bank and the European Banking Authority released alerts over the last three years, about this possibility.
The BoP wanted to remind users of the coin that they will bear all the risk because there is no guarantee that these coins are accepted for purchases of goods or services.

Even after these warnings made by BoP, the launch event ran perfectly with a great support from the Portuguese Bitcoin Community along with the unprecedented screening of the new documentary from Nicholas Mross “The Rise and Rise of Bitcoin” an official selection of Tribeca Film Festival. 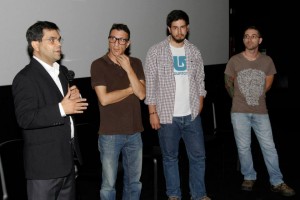 J. Lambiza and the invited experts

After the screening of this exciting documentary there was a clarification session, where Bitcoin Já invited several local experts to talk about digital currencies and to answer questions from the audience. 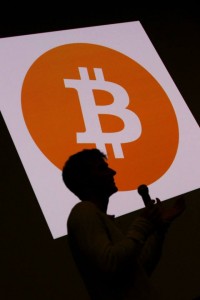 Joaquim Lambiza, Bitcoin Já CEO and founder told us that the event went much better than expected and there was a huge presence of enthusiasts from all over the country along with strong media coverage.
Joaquim said:

“The BoP Warning issue was amazing; it even got us a little push!”

General characteristics of the Teller machine:

This is a relatively small, well-designed machine with current connection to the Kraken exchange, but the designers pointed it also supports a few more exchanges, and since its being used in Europe the Company has elected Kraken to be their main reference exchange.
The Teller Machine has Bidirectional operation support, meaning you can buy and sell your Bitcoins directly from the machine. The software is prepared for additional updates in order to support some more crypto currencies. 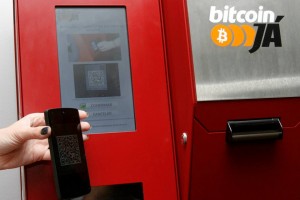 The Teller is equipped with a camera to reed QR codes and to identify ID cards or Passports and it it’s installed with a special port to deposit and withdraw FIAT notes. The software also enables the configuration of which type of FIAT currency the ATM will be working with, so it’s perfectly prepared to be used in a variety of countries.

The developers made sure to implement anti-laundering features in order to avoid illegal use of the machine. The Teller is limited to a maximum transfer of 200€ per day and per wallet; the equipment it’s also configured to a limit of daily trading amount. The creators of the equipment wanted to ensure their product would meet regulations when they apply, and the Teller is also equipped with an additional feature enabling it to identify ID cards and Passports.
Bitcoin Já is charging a 3% commission over transactions; transactions only need 3 confirmations to be fully executed. This commission is held to finance the Company.
The Company is very proud to say that all equipment and Software are 100% Portuguese made, and that will be developing further enhancements to their equipment and other products in the digital currency Industry.

I had some time to test the machine and was very happy to see the performance of the system. I actually bought a symbolic 10€ amount and automatically received it in my mycelium wallet. To tell you the truth I haven’t quite used a Bitcoin Teller and was very pleased to be the first to use the new equipment at this launching event. 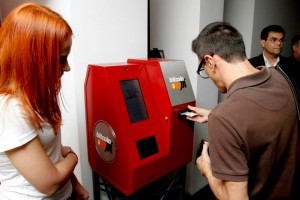 It’s quite simple to use:

Buying
If you want to buy you just simply show your QR wallet address and fill out the amount you want to buy, then you introduce your FIAT paper note in the designated port and then the machine delivers a coupon to confirm the operation. After you finished the operation you will immediately see the unconfirmed transaction in your wallet. (I actually got it within seconds!) This is actually an inedited feature that very few Tellers can offer.

Selling
Selling with this machine is also very easy. You choose the desired amount to receive and the wallet QRcode from which you want to sell, then the teller “spits” out a special QRcode coupon. Then this coupon needs 3 confirmations to be redeemed and shown to the machine in order to deliver the sold amount. 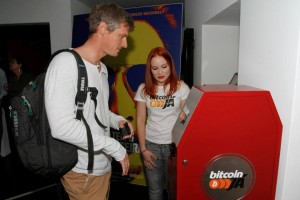 The machine accepts and also gives notes of 5 to 50 Euros. On a withdraw operation (it can be temporarily exhausted) if you want to receive in Euros the machine asks to send the equivalent in BTC. It issues a ticket with a single QRcode and after 3 confirmations, you need to show this QRcode to the machine, only then it will output your FIAT note.

Using the teller was extremely easy; Bitcoiners in Lisbon will now have a convenient way of selling their bitcoins for FIAT instantly without having to wait the usual 2 to 5 days when using a SEPA or Wire transfer.
This initiative came to awake the potential of Portuguese professionals expertise and quite possibly came advocating the entry of Portuguese companies in the digital currencies industry, and possibly, many more companies will began to emerge.