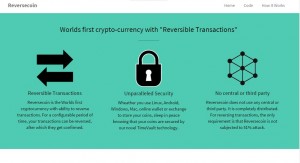 The world of cryptocurrencies is in a constant development and it never ceases to amaze us; now, a new Project is soon to introduce a new feature that has the potential to shake the cryptocurrency development grounds and to redefine the way we use and protect our coins.

Reversecoin is the World’s first cryptocurrency that allows users to reverse transactions. Reversecoin will give users the chance to reverse transactions within a configurable period of time while granting them full access at any time to their coins by a combination of the best online and offline wallet technology.
With Reversecoin, users will be able to create two different kinds of accounts: Standard Accounts and Vault Accounts.

Standard accounts behave very much like Bitcoin accounts and allow users to send and receive money for daily purposes.

Vault accounts act much like a bank savings account, where users can deposit large amount of coins and keep them safe from hackers. Each vault account has a configurable timeout and is backed by two key pairs, one online and another offline. Users only need the online key pair to transfer coins from the vault. When users transfer their coins using online key pair, their transactions get confirmed after they stay in the blockchain for an extended timeout period.

“Vault account has the ease of use of hot wallets (online account) and security of cold wallets (offline accounts). We are also working on a monitoring service, to send you real-time alerts, when your coins are transferred from your addresses”

The Reversecoin team assures that the software is fully operational for, Linux, Mac and windows. Users can sleep peacefully because their online wallet or exchanges where their coins are sitting are totally secured by the Reversecoin novel TimeVault technology.

The Reversecoin Project final version will be based on Bitcoin code, using Proof-of-Stake (PoS) for mining. Reversecoin does not use any central or third party. It is completely distributed. For reversing transactions, the only requirement is that Reversecoin is not affected by a 51% attack.
Recent flood of attacks including Heartbleed, Shellshock, unpatchable USB malware etc. are real proof that anything and everything online, is hackable. The team’s survey on Stolen Bitcoins shows that about 300,000 BTC (worth about $100 million) have been stolen so far. It is well known that online wallets are hackable and offline wallets offer great security, but are inconvenient to use. By introducing new features such as Reversible transactions and TimeVault The team believes it has solved the puzzle when facing the security threats cryptocurrency users have to deal with these days.

“No one can steal your Reversecoins, even if they know your online keypair.”

Introducing a feature like Reversible Transactions can be a sure bet when addressing security issues; however it could also lead to a new set of dramas. Indeed a feature like reversed transaction can be the “holy grail” for security but it is also sure that it could raise a number of related issues.
Nevertheless, the Reversecoin team seems to know what they are doing and has been extremely confident about this Project.

The Team is aiming to deliver the final version by the first quarter of 2015. Fundraising starts on January the 15th.
To know more about Reversecoin, read the white paper, checkout the proof-of-concept code and visit the Reversecoin site.

How do you see Reversecoin fitting in the Cryptocurrecy ecosystem?