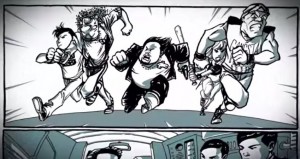 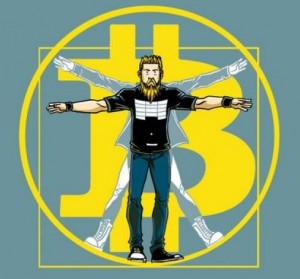 Satoshi Nakamoto, the famous creator of the Bitcoin protocol, could be anybody in today’s modern world. During his process of technology creation, Nakamoto retained an essence of pure anonymity to thwart any sort of government intrusion. As a side-effect, Bitcoin critics have had trouble analyzing the merits of someone they can’t identify, and they can’t track him down for his fortune.

On the opposite end of the spectrum is Bob Galt. In the comic book world co-authored by Alex Preukschat called “Bitcoin: The Hunt for Satoshi Nakamoto,” Galt is being chased by a mafia-type organization under the impression that he’s Nakamoto. Unfortunately for them, along with Galt, he’s never even heard of Bitcoin before. The story spirals into a bigger-picture world of bitcoin references, blockchain technology and cryptography as a whole.

Recently, Preukschat sat down with Bitcoinist for an interview about his comic book and how bitcoin changed the life of himself and his team.

Is there any chance you can you tell me a little bit about the main character and storyline?

Absolutely. The main character is Bob Galt (there is a hint here with this name and the whole book is filled with written and visual hints). The plot revolves around two characters: Alice and Bob. Bob is being chased by a Mafioso group of thugs who think he’s Satoshi Nakamoto and who are trying to kill him to grab his stash of Bitcoins (which is rumoured to be worth about $1 billions), but Bob is saved by Tak; a cypherpunk hacker who knows the score and is watching out for him.

Bob says he’s totally innocent and doesn’t even know what Bitcoin is, so Tak has to explain it to him and to add to the mix, agents contracted by the NSA are monitoring the situation, and they have their own ideas about what to do with “Satoshi”. The comic is littered with subtle visual references and the dialogue lays out in straight terms what Bitcoin is, why it’s so radical and what blockchain technology means for governments and society in general.

So how do you feel now that the comic is released?

The best feeling has been to receive photos from people all over the world thanking us for doing this graphic novel about Bitcoin. We have been very lucky to count with the support from people around the globe wanting to make this a success.

Another special moment was when the Spanish edition went into distribution and again Bitcoiners from around Spain started sending me photos from FNAC stores (a bookstore similar to Barnes & Noble in the United States). It has been a real sense of achievement to bring Bitcoin to the physical world where any average person can just run into the book and maybe discover a technology today that will change his life in the long term and eventually they will remember that our graphic novel introduced them to the whole subject of cryptocurrencies and decentralization.

We are really proud of this and hope we will be able to replicate the Spanish experience in many more countries to bring Bitcoin closer to the people in the street and create interest in a fun way which is the whole mission of our BitcoinComic. Now that we have created the graphic novel it is really cheap to localize it with a translation and a local publisher and we hope to count with the support from local Bitcoin communities to make that happen in as many countries as possible.

I’m curious, what was one of the biggest obstacles you faced completing the comic book?

Every phase had its own challenges. At first I was afraid if we would be really able to create graphic novel that would be really good enough and would make me proud to share with the world. But our team worked really great and after ten months of hard work we were quite happy with the result. Then we need to think about letting people know about this and, no surprise, this was a lot of work too, but the community started really getting excited about it and we managed to raise 64 bitcoins which is well above the 40 bitcoin goal we had.

Our main goal with the crowd sale was to gain the trust and support of the global Bitcoin community and we hope they will be our ambassadors in the world using the Bitcoin graphic novel to share their passion with their loved ones and friends about Bitcoin.

Without giving away any spoilers, what’s your favorite part of character in the story?

I like both Bob and Tak very much and can identify myself with both of them. There is one page, which I consider a piece of part, where Tak explains in a meditation position what Bitcoin is about that I love. I also love the last page which represents the blockchain with people around the world filling the blocks and also some famous Bitcoiners in them with a final message that I truly believe in.

What was your favorite part of the entire comic process?

How has Bitcoin changed your life personally, or the lives of those on your team?

It has changed my life a lot. One thing I love about the Bitcoin community is that it is forward looking and wants to change the world for better by being a strong community of like-minded people for the Bitcoin protocol. My original area of interest is money history, economics and wealth preservation, but Bitcoin opened this amazing world about decentralization, cryptography and open source to me that I really enjoy. In a “dehumanized” world as ours I truly hope that decentralized technologies will be able to change our organizational models. As society we still don’t think enough about how much organizational structure shapes our life and behaviour and decentralized models seem to be more the right fit for human nature in many cases.

While the comic is on sale on Comixology for English readers, when will fans be able to get their hands on a physical copy?

At this moment we have 40 hardcover and 80 softcover left which are available with Dibbuks, our publisher, online shop via BitcoinComic.org (then you click Buy Comic and it takes you to the Spanish language web shop where you can buy the graphic novel with bitcoins or fiat money). I have to mention that Dibbuks is taking bitcoins for their whole web shop and for all their collections and as far as I know they are one of the first comic publishers in the world to do that.

Having said that, our dream would be to find a good quality publisher in the USA and UK to get Bitcoin to Barnes & Noble and other shops to make it available to as many people as possible and put up Bitcoin posters across the country. Maybe one day we will have that opportunity. Spain was the first country and we will continue trying to get it published in more countries with support from the Bitcoin community. Our next goal is France/Belgium and Argentina. France/Belgium because graphic novels are a highly valued art form in those countries and taken very seriously. Argentina because they have an awesome and dynamic community and we would like to help as many as possible of them to get this hand on the Bitcoin Comic.

Where To Buy The Book

There are two places fans of the Bitcoin comic can purchase the story in the format of their choosing.

Do you think you’ll be picking up The Hunt for Satoshi Nakamoto? Let us know in the comments section below!

Images From The Hunt For Satoshi Nakamoto video and website