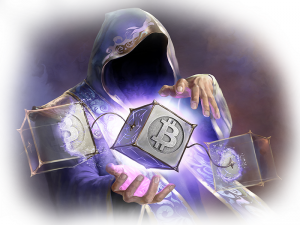 Spells of Genesis (SoG) is a new blockchain-based trading card/arcade game that has managed to gather more Bitcoin enthusiasts than any other game. The upcoming game, made by swiss-based EverdreamSoft, is said to be integrating Bitcoin and blockchain technology within the game.

SoG has been in full development, and the team already released a playable beta version. The token sale started in early August, and in a few days reached its main funding objective. Unexpectedly, the team reached its objective and is now ready to implement extended goals.

The Token Sale and Extended Goals 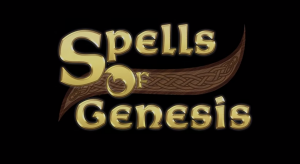 The token sale began early in August, with the minimum goal of completing four initial milestones is already raised. In just a 2 weeks, the token sale was able to gather 811 BTC, the equivalent of $210 000 USD as of press time.

Now, having accomplished its primary objective, and still 15 days to go for the end of the token sale, the team is raising more funds in order to reach newly introduced extended goals and add exciting new features to the game, like player vs player and user-generated tournaments via smart contracts.

Having in-game smart contracts might be very interesting. Imagine a player who wants to create an event or a tournament right inside the game. He or she could write the rules of the tournament and make sure that the software willd enforce the contract and give the rewards to the right people if the conditions are met. Thus, smart contracts will enable players to create provably fair game sessions and tournaments.

Spells of Genesis First Limited Series of Blockchain-
Based Cards

SoG developers believe that players should own their game assets not only in the game, but also on the blockchain. Therefore, the developers are trying to create a unique link between SoGs and other blockchain-based projects by integrating them into the game. For SoG partner projects, the team is launching a limited series of blockchain-based trading cards. 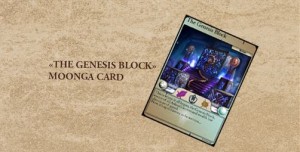 EverdreamSoft, together with its collaborators and SoG partner projects, is launching a series of special blockchain-based trading cards for their Moonga and Spell of Genesis games:

The Genisis card was originally set to be the first ever card and one of the most valuable and rare items in the game. Genisis card will only be available for premium grades.

The SJCXcard, playable as “Storj Library,” is launched in collaboration with Storj, which is developing a revolutionary, decentralized, and secure cloud storage platform. There will be 1000 cards, which can only be obtained by using Storjcoin X.

The Gemzcard, playable as “Precious Gemz Box,” is launched in collaboration with GetGems, which is developing an innovative messaging app with a built-in Bitcoin and Gemz wallet. There will be 1000 cards, which can only be obtained by using Gemz.

Special card to honor the Bitcoin creator. Only 200 of these cards will ever be issued, making a very valuable card.

The FDCARD is a rare trading card exclusively designed for FoldingCoin, only 300 unique trading cards will be distributed among the folders. As a Counterparty asset named “FDCARD”, they are freely tradable.

SoG, has also released a limited quantity of a unique game card inspired by ShapeShift.io. The scarce digital asset, named “ShapeShift- The Wanderer,” will have a limited quantity of 100 cards available for purchase via the ShapeShift.io exchange. Starting August 12 and ending September 9th, 2015, 25 new cards will be put up for sale every week. Regardless of how many players sign up for SoG, no more than 1,000 of these cards will ever exist. The card exists on the Counterparty platform, which utilizes the Bitcoin blockchain to track creation and transfer of digital assets. The assets can also be bought through the Counterparty (XCP) platform.

What do you think about the developers introducing smart contracts in the game? Let us know in the comment section below!