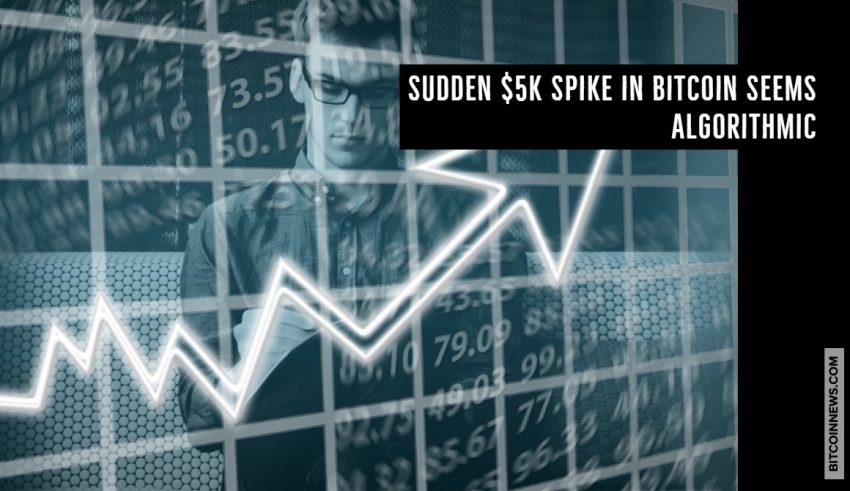 Bitcoin’s price action is on the top watchlist of both crypto pundits and onlookers, and it would appear everyone’s watching to see what new price the top cryptocurrency by market capitalization would attain. In the early hours of today, what appeared to be a blip occurred on the market took place – Bitcoin reached a new trading price of USD 5,000 for the first time in over four months.

According to Reuters, the sudden 20% leap may have resulted from some form of algorithmic maneuver trailed in an order placed by an anonymous buyer that triggered a trading frenzy from crypto traders leaching off the opportunistic event. Further, altcoins took a ride with Bitcoin and recorded as much as double-digit profit.

The source stated that CEO of London-based cryptocurrency firm BCB Group Oliver von Landsberg-Sadie stated that “an algorithmic order worth about USD 100 million spread across major exchanges – US-based Coinbase and Kraken, and Luxembourg-based Bitstamp,” may have triggered the frenzy. He explained:

“A single order has been algorithmically-managed across these three venues, of around 20,000 BTC… the volumes on each of those three exchanges were in-concert, synchronized, units of volume of around 7,000 BTC in an hour.”

Unlike the traditional currency markets, one swoop order could indeed make a huge difference in the crypto market, and while analysts could not tie this specific order to any ongoing or upcoming major event, the spike may have been unwarranted and still, it was enough to refresh the hopes of Bitcoin enthusiasts.

On a broader scope, Bitcoin was reportedly being amassed by retailers and has been corroborated by a recent report also indicating that the unspent transaction outputs (UTXO) for Bitcoin have reached an all-time high, a marker showing the accumulation of Bitcoin.