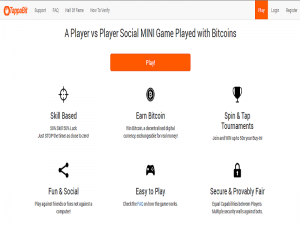 TappaBit is different from most games in Bitcoin that is not one of the gambling variety. For people that want to play using Bitcoin but not leave it all entirely up to chance, TappaBit is an engaging Bitcoin game alternative.

The game is provably fair, through the use of mixing 3 client seeds, 3 server seeds, and 3 nonces, with the verify button easily accessible above the chat.  Described as a “PVP Social MINI Game”, the point of the game (and way to earn Bitcoin) is to stop the timer as close to zero as possible. The winner is decided after 5 rounds, and the player who has accumulated the most points (stopped the timer as close to zero the most times) receives the prize pool. I spoke to the Tappabit team regarding their product, and how it differs from a run-of-the-mill Bitcoin gambling casino.

Tell me a little bit about the history of how Tappa Bit became a reality.

What is Tappa Bit?

At TappaBit.com you will find a special type of Tournament called spin & tap. A 3 player Provably Fair Tournament played in 5 Rounds (30 seconds each) with a random prize pool ranging from 2-50 times the buy-in.

Players In every round, have to stop the timer as close as possible to zero to win Game Points. The player with the most game points at the end of the 5 rounds wins the prize.

Players can buy-in for 0.003 BTC and win from 0.006 BTC and or up to 0.15 BTC. When 3 players enter a tournament, a random reward is calculated based on a set of predetermined possibilities for each reward.

How is TappaBit different than Bitcoin gambling?

TappaBit is not entirely based on luck, but on skill instead. Its 50% skill 50% luck. Its also player vs player, instead of playing against the house which is the style of most games today.

Why 50% luck? For 50% of your plays (rounds) in the game, we will be adding/subtracting 0-255ms randomly from the users score. A feature that we introduced lately to discourage the use of bots, a problem a lot of skill based/PVP games face. This feature is also provably fair making sure that we give no special treating to no one player.

What’s the problem with Bitcoin gambling?

I don’t see a big problem in Bitcoin gambling, but with gambling in general, relying on luck means that you are not in control. With skill-based games you know that with practice you can be in control of the outcome.

How does TappaBit solve this problem?

TappaBit even offer a free room to practice your skill without losing any money. You just need to stop the timer as close as possible to 0. When you reach a high enough skill you can reach a level of confidence, and thus a higher chance of positive outcomes. This is something we are able to achieve only because of Bitcoins existence, based on allowing micropayments to be affordable for both the user and the game admin.

Thanks to the people over at TappaBit for allowing me to conduct this interview.