The 2015 Texas Bitcoin Conference will showcase a keynote delivered by George Gilder, who will discuss themes from his upcoming book, Bitcoin & Gold: Information Theory of Money. The conference will take place March 27 through 29 at the Moody Theater in downtown Austin. 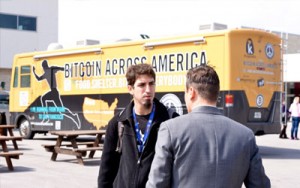 In his 17th book: Bitcoin & Gold: Information Theory of Money, Gilder advances his view of the existence of a disconnection between the needs of players in the global financial markets and the requirement for a stable economy to encourage innovation. He further asserts that capitalism is chiefly not an incentive system, but an information system. This is an extremely peculiar statement, coming from an economist, and we are looking forward to hear his explanation about that viewpoint. He also goes a step further by describing the role of Bitcoin and other cryptocurrency approaches in future economic markets.

There will be other speakers at the Texas Bitcoin Conference, including:

The Texas Bitcoin conference we notice a roster of experts working at the forefront of Bitcoin 2.0, blockchain and IoT technologies, including:

The 2015 Texas Bitcoin Conference is going to be sponsored by some important businesses in the digital currency sector. For example, Cryptocurrency Partners, Dapps Fund, Factom, GoCoin, Lighthouse Partners, PeerTracks, Rivetz, Tally Capital and Transform Public Relations. Other support comes from the Digital Currency Council. Transportation will be professionally executed by Uber and Lyft.

There will be a second conference that will run parallel with the Texas Bitcoin Conference. The 2015 Hackathon will feature 100 developers working in teams over two days to build Bitcoin 2.0, blockchain, and IoT applications. This hackathon is being sponsored by the Dapps Fund and Rivetz. This means that the Dapps fund is once again providing $1 million in prizes for the winners and Rivetz is going to add powerful endpoint encryption to applications to the hackathon and the developed apps at the hackathon.

Are you going to the Texas Bitcoin Conference? Let us know in the comments below!