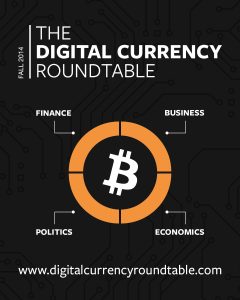 The Digital Currency RoundTable is a joint operation between Coin Apex, the NYC-based tech startup incubator and the New York City King’s College that aims to organize a series of discussions and debates about digital currencies. These discussions not only give finance, politics, economics and media students a more complete picture of the Bitcoin landscape and showcases its enormous impact and relevant challenges to overcome but are also intended to bring awareness and the widespread of information about bitcoin and cryptocurrencies in general.
Sarah Tyre, the Communication and Marketing Director for Coin Apex stated:

“A growing amount of organizations are recognizing the significance of this powerful technology and are providing the momentum needed to fuel interest in events which aim to heighten awareness and understanding of cryptocurrency, such as The Digital Currency Roundtable.”

The RoundTable events goal is to get various experts of different areas of the Bitcoin sector in a battery of public discussions and Q&A sessions, to dissect some of the major issues around digital currency.
The first event promoted by the Digital Currency RoundTable took place last November in the City Room on The King’s College campus, located at 56 Broadway in lower Manhattan, and was attended by a series of entrepreneurs, students, journalists and several crypto enthusiasts.

Bailey Reutzel, writer for PaymentsSource, and payment tech reporter who focuses heavily on the fast-evolving cryptocurrency ecosystem was the active moderator in this first debate. 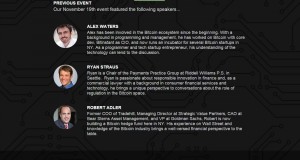 Alex has been involved in the Bitcoin ecosystem since the beginning. With a background in programming and management, he has worked on Bitcoin with core dev, Bitinstant as CIO, and now runs an incubator for several Bitcoin startups in NY. As a programmer and tech startup entrepreneur, his understanding of the technology can lend to the discussion.

Ryan is a Chair of the Payments Practice Group at Riddell Williams P.S. in Seattle. Ryan is passionate about responsible innovation in finance and, as a commercial lawyer with a background in consumer financial services and technology; he brings a unique perspective to conversations about the role of regulation in the Bitcoin space.

Former COO of Tradehill, Managing Director at Strategic Value Partners, CAO at Bear Sterns Asset Management, and VP at Goldman Sachs, Robert is now building a Bitcoin hedge fund here in NY. His experience on Wall Street and knowledge of the Bitcoin industry brings a well-versed financial perspective to the table.

The debate focused primarily the future of digital currency and how to correctly define Bitcoin, it being more as a currency or simply a protocol.
It was also addressed the issue of Regulatory arbitrage – Companies are trying to avoid unfriendly regulatory states and this forces entrepreneurs to open their companies oversees.
Another topic that was intensively debated was the BitLicence, it’s pro and cons, and how legislation can raise barriers to the crypto ecosystem expansion and development, thus the need of balancing the regulatory system with the companies’ demands; Bitlicence is an important precedent that will influence the regulatory process around the world and as such, it should try to strike balance, while it can affect the stability and incentives for new companies to start betting on digital currency. It was assumed that the regulatory pressures on the banks along the high risk involved prevent entrepreneurs to innovate and take part on the ecosystem.
The speakers also referred to Banking friction and bitcoin as a worldwide currency with a large potential to cut expenses to financial businesses in about 90% and also to overthrow companies like Western Union vs the problems that global free transactions can carry when regarding money laundering and illicit item free access.
In the end the guests expressed their opinion on what’s the competition on the space and the need for cheaper and faster payments systems followed by a Q&A with the attendants.

The organization was pretty happy with the outcome of this first RoundTable discussion and the Digital Currency RoundTable is already preparing for the next round of discussions, supposedly to be held in the 1st quarter of 2015.
Details of the next upcoming event will be released soon.