Blockchain.info just reached 2 million wallet users, a historic landmark for the company and the bitcoin community. Blockchain was founded by UK developer Ben Reeves in 2011 making Blockchain a veteran business in the space.

Within the last couple of weeks Blockchain has released a refreshed Android wallet and have reintroduced an iOS wallet on the app store which has surely helped them reach this 2 million mark. However, 2 million is a long way from being mainstream, so I spoke with Keonne Rodriguez, who is Project Lead at Blockchain and is working on the user interface (UI) and user experience (UX) of Blockchain’s services. 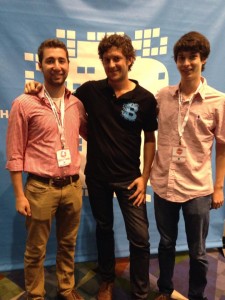 The Next 10 Million
Blockchain’s last app wasn’t as easy to use for the novice as the refreshed app is, Rodriguez stated that “The big push for this version was the next 10 million users.  My mom, my dad, my grandmother, how are we going to make it easy for them to understand it and use.” That’s why making the new apps as simple to use was key.

To reach the novice demographic Blockchain has incorporated the first merchant map built into their wallet, making spending your bitcoin just as easy as getting them. Blockchain took this aspect quite seriously, verifying that every merchant listed accepts bitcoin.

If you notice the iOS app and Android app appear pretty similar and this is by no coincidence. Blockchain.info really emphasizes that their services are part of a product family, so if you know how to use one, you can use the other.

“All of our wallet products across the board are going to be rebranded and the redesigned to be a cohesive family of products.  Up next is the HTML5 wallet and very shortly after that will be Blockchain.com web wallet,” said Rodriguez.

That’s right, a new HTML5 wallet, which will give users the app like feel via the web.

Blockchain is going beyond apps, however, by making sending bitcoin as simple as sending a text or e-mail. This is as simple as the recipient clicking ‘claim it’ once a user receives the notice a prefunded wallet with the amount will be created. No email or identifying information required.

Mainstream
Like most of the space, Blockchain is trying to make Bitcoin mainstream. Rodriguez believes this will come through merchant adoption, because Bitcoin gets value from people accepting it. Blockchain released its merchant app back in February, giving merchants the easiest way to accept the digital currency, just download an app and you’re good.

But the initiative is more than getting merchants to accept Bitcoin, it is about getting users to interact with their Blockchain wallets in a normal, everyday way.

Regarding future releases Rodriguez said “We have a lot of exciting features coming out that unfortunately I can’t give you too much insight into right now.”

So, the best thing I can tell you to do is wait for these features. Blockchain.info is truly an innovative company and it will be interesting to see how they get involved in Bitcoin 2.0 projects or anything new that utilizes the blockchain.

The post The Future of Blockchain.info appeared first on Bitcoinist.com.