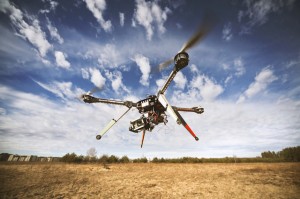 Swarm, a next generation crowdfunding platform leveraging Bitcoin technologies, has announced the first five companies that will raise funds on the Swarm platform: Manna, Coinspace, Swarmops, Judobaby, and DDP.

Manna is a personal smart drone company that envisions creating drones that can be controlled over 4G LTE Internet from your smartphone.

“…everything is Internet-based which is really cool, because that means rolling updates. You don’t have to buy separate piece of software or run down your computer, it’s all on the cloud. So everything that works, just works perfectly from the internet, and the drone itself is the hardware piece which is completely removed from the software which is all handled on a server somewhere else”

By design, the drone will communicate with the software over the internet. But what software, and what does it do? The Manna team envisions software with pathfinding algorithms that can automatically avoid obstacles enabling sending or calling a drone without needing a person to navigate it. The team believes that many people would want to create their own smart drone software and envisions creating “a marketplace where you can add your own apps.”

Swarm calls its first five “exciting and explosive new decentralized technology that will disrupt and disturb the status quo.” With the rise of personal robots, Manna is no doubt an interesting project that wants to bring drones to everyday people. As Eric Smalls from Manna explains in a YouTube Q&A:

“We’re really exciting about building an intelligent, personal drone that can do more than one application. What’s interesting is how the mouse changed how people interact with computers, and we already have that with smartphones. We’re now building the second part of that – drones interacting with smartphones – and making that on the Internet and autonomous, instead of human-controlled, enables everyday people to use this technology.”