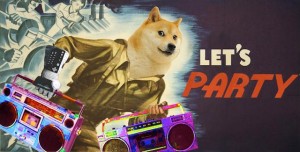 What is a Decentralized Dance Party? In the words of Tom and Gary:

“The Decentralized Dance Party (DDP) is a portable, battery-powered Party System. It consists of hundreds of Party People, carrying boomboxes, and a DJ who wears a backpack, containing an FM radio transmitter… “DDPs are hosted exclusively in public spaces and are completely open for anyone to join. Everybody of every age, background, and style is encouraged to come out and let loose. “The DDP consistently brings thousands of strangers together, and the spectrum is incredible — moms, dads, kids, people of color, women of color, jocks, nerds, crust punks, homeless people, business professionals, and the list goes on. No attitudes, no judgements, and no rules! The most inclusive parties possible, and the whole operation is crowdfunded.”

In August 2010 the first DDP Facebook invites were sent out. In a classic entrepreneurial move, the invites were sent before Tom and Gary had the resources to launch DDPs. But overwhelming support from across the country and their discovery of IndieGoGo led to launching crowdfunding campaigns posed to fund DDPs at seven cities: Calgary, Saskatoon, Regina, Winnipeg, Toronto, Fredericton, and Vancouver. The DDP crew successfully completed their first Party Safari Tour, and brought DDP to seven cities in 18 days. The Party Safari returned in 2011 as the Strictly Business Tour where the theme was to wear business attire. The Strictly Business Tour started in Canada and made stops at Regina, Winnipeg, Saskatoon, Calgary, and Victoria. The Tour expanded to the USA in 2011, and brought DDP to Seattle, Portland, Los Angeles, Phoenix, Austin, Houston, New York City, and San Francisco. The Tour returned in 2012 and brought DDP to 9 more cities in the US. Now, the DDP crew wants to bring DDP to the entire world in an effort they are calling “The Global Party Pandemic AKA The Grand Unification Tour.”

Tom and Gary’s Decentralized Dance Party movement is inspiring and ambitious because as cliche as it may sound, DDP strives to bring joy to the world in a decentralized, drug-free, and inclusive manner. If you have not yet checked them out, visit the DDP site to learn more.

I leave you with the inspiring words of Tom and Gary:

“The prime objective is to create an experience so novel, and exciting and free that the atmosphere itself releases everyone from their inhibitions rather than relying on drugs or alcohol. This is why our parties always proceed peacefully and respectfully. Partying by elevating consciousness rather than destroying it — that is where the revolution truly begins and why this goes far beyond partying…We’re in the business of creating pure joy. The only bottom line that truly matters. The DDP brings people together and sets them free.”