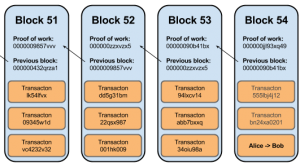 In October of 2014, Gavin Andresen sparked a community-wide debate over the future of the hard-coded, 1 MB size-cap on Bitcoin blocks. Andresen proposed a change to the Bitcoin protocol that would implement an upward-scaling block size limit, necessitating a hard-fork of the blockchain.

Gavin Andresen in “The Rise and Rise of Bitcoin”

Many people opposed this idea — mainly on economic grounds. They argued that a constantly increasing block size limit would make the supply of block-space far outstrip the demand for transactions, which would greatly diminish transaction fees. Falling transaction fees would become a severe problem once the maximum Bitcoin supply had been mined, since the only remaining incentive for miners to uphold the network would be those fees. Falling fees would make mining unprofitable, forcing miners to shut down their rigs, thereby jeopardizing the security of the Bitcoin network.

Gavin responded to these arguments in a post on the Bitcoin Foundation’s blog ten days after his initial proposal. However, the debate did not go much farther than that, as other news pushed the block size limit issue aside.

A few months later, in January of 2015, Andresen somewhat revived the discussion by posting the results of a 20 MB block size test on his personal blog. Gavin reported that his test was an overall success, and that he saw no reason why the network could not handle an increased block size. Despite the technical success of Andresen’s test, detractors say that raising the block size limit will still be an economic failure.

I disagree with the economic arguments against raising the block size limit, because network security cannot be influenced by the block size limit in any meaningful way. Mining centralization occurs both when the hash rate grows and declines, meaning that network security is not an issue of Bitcoin mining profitability. Hopefully, the following economic analysis will adequately support my argument, as well as clear up the confusion present in this debate.

There are two important characteristics about Bitcoin mining that will prevent fees from falling to an unprofitable level with a large block size. Bitcoin miners are human, which makes them rational and economic actors, and they have the ability to choose the size of the blocks they mine.

Therefore, if an increase in the block size cap creates a surplus of block-space, and transaction fees start to fall, Bitcoin miners will simply produce smaller blocks. Block sizes will shrink until transaction fees rise to a profitable level. These fees will be able turn a profit as long as there is a high enough demand for transactions, even if the maximum block size is unlimited.

The “Race to the Bottom” Argument Employs Flawed Monopoly Theory 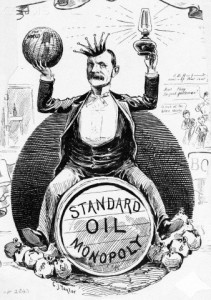 A potential rebuttal to my above point is that miners being forced to decrease the size of their blocks to maintain profitability will allow larger mining firms to produce larger blocks, creating lower fees, which would allow large firms to take over the market. Essentially, raising the block size limit will initiate a “race to the bottom,” where big miners absorbing the shocks of falling fees unfairly push the little guys out of the game.

This argument should sound familiar, because anti-market political pundits have used it as justification to legally limit the size of business firms for over a century. However, the argument is based on flawed monopoly theory.

In reality, there would not be much of an incentive for a large firm to undercut a smaller one unless the larger firm knew that it could better satisfy the market and bring in more profit. The large firm would be unable to undercut the competition, corner the market, and then raise prices above previous levels without making any changes in the goods or services provided. If a business attempted to do such a thing, smaller firms would simply return to the market and offer their old, lower prices, taking business away from their big competitor.

Many people use John D. Rockefeller’s Standard Oil “monopoly” as a historical example of their flawed monopoly theory in action. Rockefeller would enter a new area, offer his goods for a lower price than the competitors, and take over the market. These people say that Standard Oil was being “predatory.” As it turned out, though, Rockefeller had simply devised a more efficient way of refining oil. Standard Oil did not use its sheer size to “unfairly” force competition out, it merely produced the same products as the competitors at a lower cost, which undoubtedly benefitted consumers.

The same is true for Bitcoin mining firms. Barring the attainment of special governmental privileges, large mining firms will only be able to push out small competitors and keep them out as long as they maintain a true competitive advantage, providing real benefits to the market. 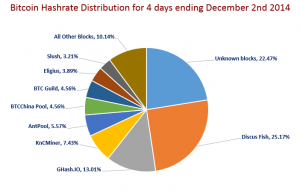 However, in regards to Bitcoin, there is one aspect of the economics of competition that is negative. Due to economies of scale, Bitcoin mining firms will grow to an empirically optimal size — which possibly means that one firm could gain 51% or more of the network’s hashing power. While a firm controlling 51% of the hashing power does not create any economic inefficiencies, it greatly diminishes the security of the Bitcoin network. The hallmark of Bitcoin lies in its decentralization, taking that away would erase a large amount of the Bitcoin community’s confidence in the network.

The fact of the matter is, however, that a cap on the Bitcoin block size will not stop Bitcoin mining centralization in the slightest. The problem with mining centralization is not found in transaction fees, but rather the economies of scale created by the costs of running Bitcoin mining hardware. Increasing electricity costs makes firm consolidation more efficient, and those larger firms are able to afford lower fees, so the smaller, less efficient competition gets pushed out of the market. Furthermore, when Bitcoin mining profitability falls, small miners will have to shut down their rigs (at least until difficulty retargets), while larger miners enjoying the economies of scale can still efficiently mine at lower revenue levels. A mainstream example of this phenomenon can be found in the current oil price situation. Smaller, high-cost frackers in the United States are being put out of business by low oil prices, while the larger, more efficient drillers of OPEC are absorbing the lower prices with confidence.

Either way, whether mining profitability rises or falls, there will be a tendency towards mining centralization due to economies of scale. Thus, the problem actually has very little to do with transaction fees and almost everything to do with mining costs.

So what does all this mean? If a block size limit will not stop Bitcoin mining centralization, then what will? Unfortunately, I do not know the answer to that question. What I do know, though, is that keeping the current Bitcoin block size limit will hinder the long run scalability of the network, while totally failing to prevent mining centralization. The solution to network security must be found in some other place.

The only thing the block size limit can do — and was ever intended to do — is prevent spam from bloating the blockchain and damaging the network. As the Bitcoin economy grows, and more transactions are sent over the blockchain, the network will be able to handle larger blocks without inviting malicious spam attacks. Therefore, when considering the economic arguments I advanced in this article, combined with Gavin Andresen’s testing, gradually increasing the block size limit seems like a safe scalability option.

What do you think about raising the block size limit? Let us know in the comments below!

Images courtesy of Yevgeniy Brikman, “The Rise and Rise of Bitcoin,” and The Finance Guy.