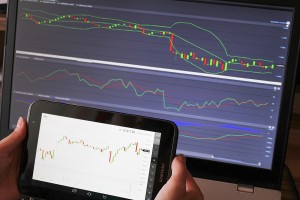 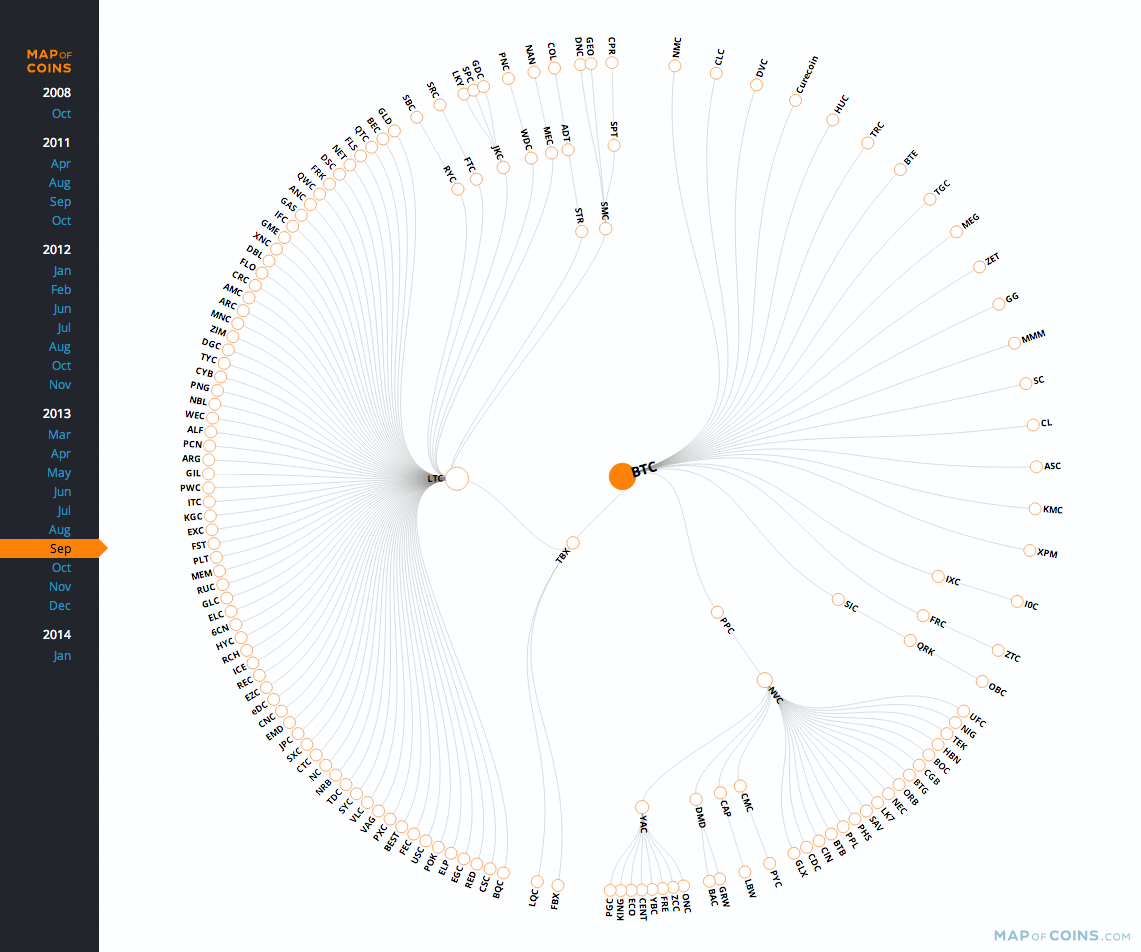 The full map of Bitcoin via MapOfCoins.com

On first glance, Map of Coins is the coolest thing ever done in an internet browser. It provides a visual representation of the many forks of Bitcoin that have come about over the years. A lot of the stuff that’s easily forgotten in the day-to-day, endless onslaught of new altcoins – that are often essentially nothing more than rebranded forks of successful projects – is easy to remember thanks to MOC.

For instance, the first scrypt-based coin was called Tenebrix. When it was released, one of its creators seemed to believe (laughably, in hindsight) that scrypt was ASIC and GPU-resistant, writing in the announcement thread:

“It implements a proof-of-work scheme based on scrypt, a cryptographic construct specifically designed to resist [the] creation of efficient GPU, FPGA and even ASIC implementations.”

Later, scrypt would play a prominent role in two other well-known altcoins, Litecoin and Dogecoin. For much of 2013 and 2014, scrypt was the way to go for a new coin, and the words “copyright the Litecoin Developers” appeared in the code of many altcoin wallets.

The beautiful design of MOC is enviable, and with little effort the user can get lost in the documented history of cryptocurrency development. It doesn’t only credit Bitcoin as being an original, however. NXT, ByteCoin, and Ripple also have independent fork maps. For the uninitiated, Bytecoin is a cryptocurrency that has little relation to Bitcoin except in concept, developed by and for the dark web, using a unique algorithm, CryptoNight. Perhaps its two best-known cousins are QuazarCoin and Monero.

Those with an in-depth knowledge of the alt-coin space will, presently, be able to spot omissions and slight inaccuracies. These mistakes don’t seem intentional, but rather a result of the ongoing development of this massive project. For those with that level of insight, they are asking for knowledge contributions.

I was personally thrilled when I came upon this resource, and anyone else who desires to know more about this wild and wonderful new world we’re building will likely feel the same way.

This project is a bit more straightforward, but still highly useful. HistoryofBitcoin.org walks the user through the timeline of Bitcoin’s development and rise to prominence. This site also has a very attractive design.

It wastes no time, letting users start in 2007, when it is said that Satoshi Nakamoto began work on the Bitcoin protocol. The only thing the site lacks is a search feature, but for needs like that, users can always just hit up the Bitcoin wiki. History of Bitcoin, in my estimation, serves two main purposes: a quick refresher for those with bad memories, or a tool to pass along to new users of cryptocurrencies who thirst for knowledge but don’t necessarily know where to begin.

Together, History of Bitcoin and Map of Coins make for a well-educated operator if used correctly and assuming verified sources. No one likes a know-it-all, but having the power of the facts on your side is always a plus, especially if you encounter misconceptions about cryptocurrencies in your daily life or you are the friendly neighborhood Bitcoin Expert.

Do you use either or both MapOfCoin or HistoryOfBitcoin? Let us know in the comments below!

The post Two Websites for the Aspiring Bitcoin Expert appeared first on Bitcoinist.com.