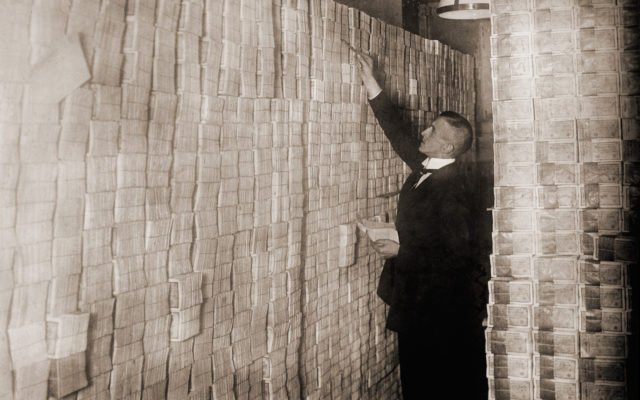 The Bitcoin price in US dollars has begun exhibiting a trend which closely mimics the price history of Germany’s Papiermark during hyperinflation.

A summary chart uploaded to social media by the cryptocurrency analysis account planB compares BTC/USD over the past eight years with the Papiermark’s value versus the previous gold mark.

Germany abandoned the gold mark in 1914, shifting to the Papiermark, which subsequently became a symbol of hyperinflation in the early 1920s.

As the chart data shows, the past eight years of BTC/USD performance is eerily similar to the last five years of the Papiermark’s devaluation – from the end of the First World War in 1918 to 1923.

During that time, the government of the then Weimar Republic printed paper banknotes in ever increasing quantities.

“What is really interesting is that the Germans in 1918-1923 didn’t realize their Mark was going down (because of the printing), they thought currencies of other countries were going up (so the printed even more),” PlanB commented, likening the effect to current central bank policy of quantitative easing.

As Bitcoinist reported, Bitcoin’s use in hyperinflation cycles continues to penetrate public consciousness in 2019. Venezuela, which is currently suffering annual inflation of over one million percent, is reportedly now struggling to pay foreign money printers for its ballooning supply of paper notes.

At the same time, cryptocurrency and financial industry commentators continue to debate Bitcoin’s place in the future economy.

Bitcoin, some argue, can only reach significant value if it can scale to meet transaction demands of a global audience.

Bitcoin, Blumer argued, does not in fact have to meet those demands as its place will be as a store of value – specifically, a definite replacement for gold.

Considerable efforts remain tied to giving the Bitcoin network greater capacity, with more data noting that expanding block sizes have not resulted in higher fees due to the apparent success of Segregated Witness.

What do you think about Bitcoin’s price and scaling future? Let us know in the comments below!