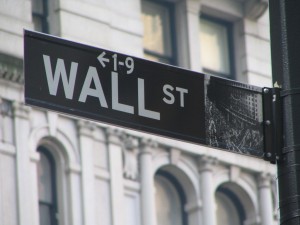 For years, speculative day-traders have been eagerly awaiting the day that Wall Street cash flows onto their favorite exchange. If a few Wall Street stock traders would come forth and spark the daily volume, maybe the markets would go up instead of down in 2015. When big power-players start placing buy orders, the moon will surely be within the grasp of anyone holding their coins for all that time.

MarketWatch recently published an article warning investors to keep bitcoin far off their radar due to security issues within the industry. They also touched on volatility, noting how the bitcoin price is highly unpredictable going into its sixth year of existence.

With all due respect, serious investors aren’t looking into bitcoin as a direct investment vehicle – they’re looking at the businesses supporting its infrastructure.

The investor money flowing into the bitcoin space isn’t going to an exchange in Slovenia; well, technically it is, as Bitstamp raised $10 million in 2014. The cash isn’t going to buy orders. It’s going to the businesses behind like Kraken, OKCoin, Circle and Coinbase that are rapidly expanding the touting promising returns.

Already in the first month of 2015, Coinbase has raised a quarter of the previous year’s calculations, $75 million, from large financial institutions such as USAA, BBVA and the New York Stock Exchange.

“With this investment, we are tapping into a new asset class by teaming up with a leading platform that is bringing transparency, security and confidence to an important growth market,” said NYSE president Tom Farley in a release. “We look forward to supporting Coinbase’s growth utilizing our global distribution capabilities and market expertise.”

BBVA shared a similar sentiment to Farley. They said by serving consumer, merchant and developers, Coinbase hits on the important aspects of the industry. They believe Coinbase provides them with one of the best viewports into new developments and applications made for bitcoin.

After the announcement, Coinbase unveiled their new “regulated” exchange, but Wall Street has shown they aren’t currently interested in playing the markets no matter how badly Coinbase or the Winklevoss twins desire. Wall Street and Silicon Valley are placing their funds into businesses that provide a service and make money along the way – no matter the industry. It just happens that bitcoin is the ground floor of the blossoming technological breakthrough.

That’s not to say that investment in bitcoin companies is a bad thing. Take ChangeTip – the famous tipping application people use to send bitcoin through Twitter, Reddit and now Facebook. They raised $3.5 million in funding in December, led by San Francisco-based venture capitalist group Pantera Capital. While the investment is substantial, it’s not technically in bitcoin on the markets.

According to Pantera Capital’s CEO Dan Morehead, their investment into ChangeTip is to spur adoption.

“Tipping is likely to be Bitcoin’s first killer app – seamlessly integrated into social media, enabling people to send money in a way that’s instantaneous, free, borderless, and without minimums. This could have a huge impact on adoption.”

Morehead’s intentions lie in bringing bitcoin to a wider audience, most likely aligning with those of Farley, Marc Andreessen, Sir Richard Branson and all other major investors in bitcoin companies. If bitcoin does well, so do the businesses and their investments. The same could be said with any commodity or trend today – it just happens that a digital currency is catching on.

There isn’t too much of a need to warn investors not to look at striking it rich off bitcoin because, in the end, they’re not trying. They’re placing their funds in the hands of businesses that offer something substantial to a target demographic. It’s the same practice they’ve always done. Wall Street and Silicon Valley money is starting to flow into bitcoin…just not in the way some expected.

Is Wall Street more interested in business than bitcoin? Let us know what you think!

Photo credit to Wikimedia and Pixabay