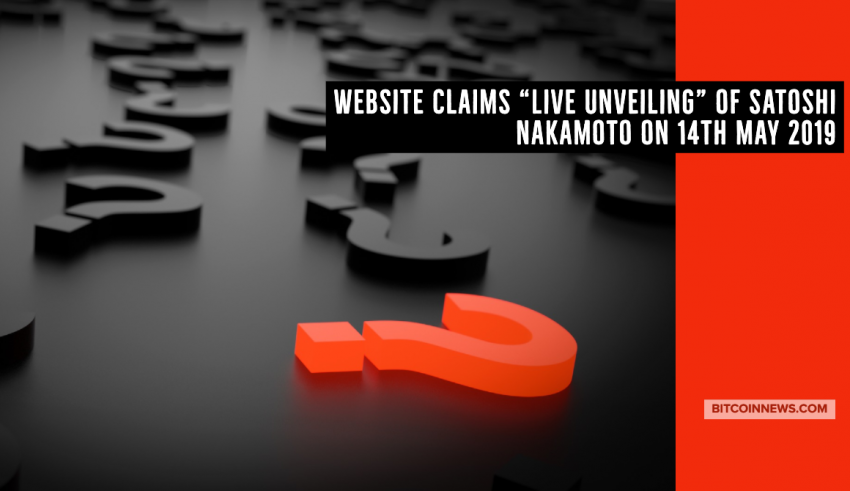 A new website launched over the weekend is making its rounds on social media and crypto circles, making a bold claim to launch a “live unveiling” of the pseudonymous creator of Bitcoin, Satoshi Nakamoto.

The website, Twitter and hashtag all bear the #gotsatoshi tag. A live countdown is also on the website, which apparently means that the revelation will happen on 14 May, 3.50pm (GMT).

There has been no one claiming to own or manage the website, although it appears that BitcoinSV has denounced the website as “a joke”, seemingly ruling out Craig Wright, who has himself claimed to be Satoshi, as an association.

this account is a joke, Craig S Wright is Satoshi Nakamoto #Bitcoin (BSV)

Another clue lies in the Twitter account details, which also denies being associated to Craig Wright and hints at some possible association with notorious crypto influencer John McAfee. McAfee himself has recently claimed to have knowledge of who the real Satoshi Nakamoto is, along with at least 11 others:

Enough is enough! There at least a dozen crypto adherents who know the true identity of Satoshi. I can assure you, 100%, it is NOT Craig Wright. This absurd claim of Craig's is incomprehensible. Mr wright: Have you no shame? Seriously sir! Have you no shame?

He had initially promised to reveal the identity of the father of Bitcoin:

He later said he had changed his mind, on legal advice from his attorney.

Will we finally see the issue of Satoshi put to bed in 11 days? Judging from how long the Satoshi drama has been going on, we expect not.