Recently ZeusMiner decided to cancel their anticipated Volcano next gen Scrypt miner. The move to stop manufacturing chips and miners is being made in favor of shifting completely to their cloud mining platform ZeusHash. The move was a difficult one for ZeusMiner as it is a successful chip and hardware manufacturer who provided Scrypt ASIC miners to miners directly and also to vendors as ZeusMiner branded and OEM. The change was one that was especially difficult for Terry Li the CEO of ZeusMiner who’s vision brought them to the forefront of Scrypt mining manufacturers. Terry was able to take a few minutes and answer some questions for us about what happened and where ZeusMiner is going. 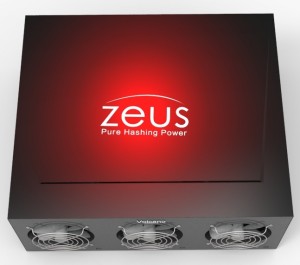 By not producing the Volcano miners, it showed a switch to cloud mining. Do you still develop new chip architectures to power the ZeusHash?

.
No, the new chip development is stopped on our side. For future hashing power for ZeusHash, we will try to work with new partners who are developing new Scrypt based chips. Once the deal is sealed we will reveal more information.

How difficult was the decision as there are many users who want to have hardware to mine and support coins of their choice?

.
In fact, now pretty much all customers made their choice. It was on par with the projection, around 70% opted for ZeusHash conversion. We expected reactions from the community and since 30% of hundreds is not a small number. Yes, there are definitely quite some unhappy customers with the decision, but we did what is responsible and refunded what we received from them. The difficulty was to face them with honesty.

ZeusMiner is not expecting to make any new hardware with our own chips. There might be a chance for OEM if a very good partner is found.

How have the new partnerships been working out the last few weeks?

It’s been good. We are able to keep our price competitive and giving stable returns to our customers. That’s very important.

Are there any plans or things you can tell me about now that are coming up?

We are focusing on improving user experience on ZeusHash. That’s our first priority. As you can tell many new features are added every week. In the meantime, we will be talking to different people about partnership and try to bring the most competitive products to our customers on ZeusMiner. So stay tuned for our update every week. :)

ZeusMiner has been working hard on ZeusHash with both the platform and costs. They have added many new features and “buffs” and will be adding more things in the future. While the decision to end chip manufacturing was difficult with the new partnerships for both Bitcoin / SHA-256 miners and Scrypt miners added with ZeusHash ZeusMiner is not stopping nor standing still. Stayed tuned there will be more from ZeusMiner, and we will get the news out about it.

What do you think about ZeusMiner’s decision to discontinue making their own chips and miners? Tell us below in our comments section.