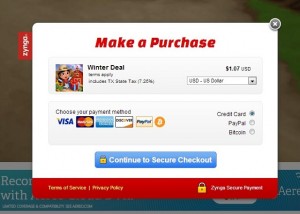 Zynga hasn’t had much to celebrate lately — the social gaming company suffered a huge drop in users last year and it hasn’t had a hit title in some time. But now it’s taking a new tack, turning to the Bitcoin community. In a post on Reddit’s Bitcoin subreddit last night, the Zynga team said it is currently “testing expanded payment options for players to make in-game purchases using Bitcoin,” specifically through the payment provider Bitpay. Currently, only seven Zynga games support Bitcoin payments, most of them titles in Zynga’s derivative “ville” series: CastleVille, ChefVille, CoasterVille, CityVille, FarmVille 2, Hidden Chronicles and Hidden Shadows.

Zynga has for years offered the ability for players to buy in-game assets and upgrades using their credit cards and PayPal, as well as Facebook local currency, but Zynga admits that Bitcoin has now become too big for it ignore. As the Reddit post states, Zynga started its test “in response to Bitcoin’s rise in popularity around the world.” It’s unclear for now just how long the test will last, much less whether Zynga will expand Bitcoin payments to other games, as Zynga said it had no comment beyond its Reddit post. Still, the move only furthers Bitcoin’s growing legitimacy as an alternative currency, bolstering the notions of those who view it as more convenient and efficient for micropayments than online services like PayPal.